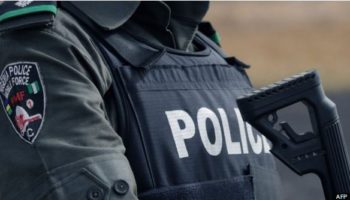 Sequel to the directive of the Inspector of General of Police, the Ogun State Police Command has given all illegal firearms bearers to submit such within the next 21 days.

The IGP, it will be recalled, last week, enforced the firearms act banning the possession and use of illegal and prohibited firearms, ammunition, weapon and devices, locally fabricated or modified that could cause death or injury of person(s) specified under chapter F.28LFN 2004.

The Command in a statement signed by its image maker, Abimbola Oyeyemi, on Tuesday, said that anyone who is in possession of any prohibited firearms to surrender such within the time limit.

The statement said anybody or group who aid and abet anyone who to the best of his knowledge have in his possession any prohibited firearms would be liable for arrest and prosecution.

The statement said, “In view of these, the Command hereby appeal to general public, groups and individuals who are in possession of any of the above-mentioned firearms to surrender it at the State Criminal Investigation and Intelligence Department Eleweran Abeokuta or the nearest Police station.

“Also, those in possession of firearms license are implored to come for proper verification and revalidation of such license as failure to do so will imply that such arms are been possessed illegally which may lead to the arrest and prosecution of such person.”

The Command stated that a Police Task Enforcement Team has been set up by the Commissioner of Police, CP Ahmed Iliyasu, to commence the mop-up, seizure and recovery of all illegal and prohibited firearms and ammunition from wrong hands, suspected Militias, militants, and criminal/unlawful gangs.

The operation according to the statement will include cordon, search and raid, seizure from any premises, hideouts, dwelling houses or buildings or sites (completed or under construction) or any other location where these illegal/prohibited firearms are kept or on reasonable suspicion are believed to be kept or being used.

“The Command also warned members of the public, individuals and groups such as vigilantes and neighborhood watch group, town unions, hunters and watch night men or any group or association under any capacity or guise other than statutory security agencies recognized and gazetted by the Federal Government of Nigeria to bear firearms of specified category; who are currently possessing and using prohibited/illegal firearms such as Pump action gun and the likes for whatsoever purpose are hereby warned and given Twenty One (21) days from the day of this publication to surrender it to the Commissioner of Police and be law abiding.

“The aim of this operation is to checkmate and enable the Police to deal decisively with Herders and Farmer’s clashes, Kidnappings, Cultism, Armed robbery, Cattle rustling, Militancy, Terrorism, and other violent crimes.

“The Commissioner of Police Ogun State Command Cp Ahmed Iliyasu PSC(+) wish to reiterate that commitment of the Command in the protection of lives and property across the State remains unequivocal and unwavering,” the statement said further.