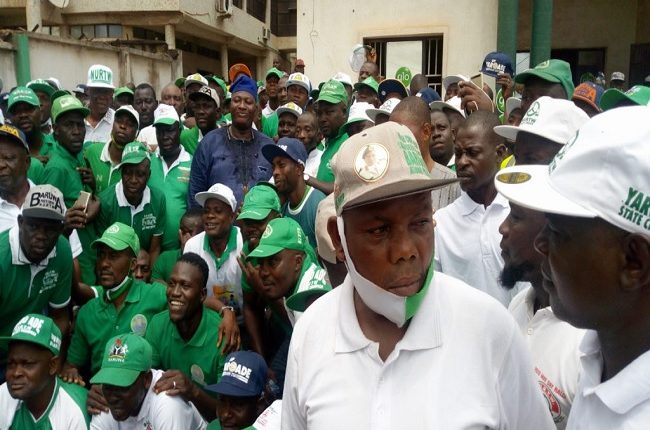 Chairman of the National Union of Road Transport Workers (NURTW) in Ogun State, Alhaji Ismail Mustapha (aka Yaro Ade) has extended an olive branch to aggrieved members of the union, calling on them to return to the union.

He noted that the internal crisis of the union are best resolved when all aggrieved parties come together.

Mustapha stated this on Friday during the reopening of the union secretariat three months after it was sealed by Ogun State Police following the union’s prolonged leadership crisis.

Sunday Tribune reports that the reopening follows the ratification of Mustapha’s election as Ogun NURTW chairman by the Nation Industrial Court on March 17, 2020.

While leading other members of the executive to the secretariat located at Asero, Abeokuta, the state capital, Mustapha noted that since the secretariat wasn’t reopened in March due to the coronavirus pandemic, it was sealed off by Police to forestall the breakdown of law and order.

Mustapha said: “When we entered this secretariat today around 9 am, accompanied by police officers from headquarters we met the place looted. My belief is that the people that left this secretariat helped us to keep our load, they didn’t steal it.

“Nobody can steal the union’s property, everything that is in the union’s office belongs to the union. When we get to the bridge we know how to cross it.

“We still consider them as our members. What we did today is to unseal our office to begin our union activities in our secretariat and for us to maintain our union in the state.

“We don’t want to drag anybody to the police. We are still appealing to them to come back because we cannot do it alone. We are calling on them to come and join us, sooner or later we will soon resolve our internal crisis. The secretariat was sealed on July 9. One of the reasons they sealed the secretariat, according to the police was to avert a crisis,” Mustapha said.