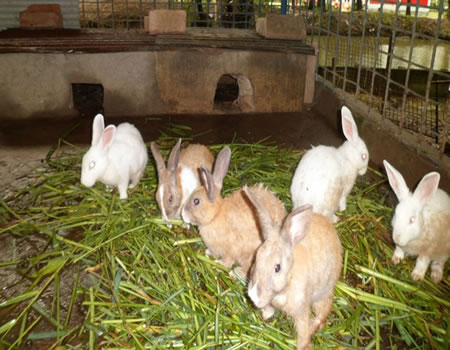 IN a swift step to curb the sudden emergence of Rabbit Hemorrhagic Diseases (RHDs), Ogun State Government has said that it will harness the integrated surveillance response, as well as engaging in continuous education of farmers.

Just as stakeholders in the rabbit meat value-chain, in the State have been warned against unauthorised use of vaccination, as it further causes outbreaks of diseases to farm animals.

Commissioner for Agriculture, Dr. Adeola Odedina gave this caution during a seminar organised for poultry farmers, at Veterinary Hospital Complex, Ita-Eko, Abeokuta, with the theme, “Promoting and Sustaining Healthy and Profitable Cuniculture in Ogun State”, as a way of combating the spread of emerging RHDs.

Represented by the Permanent Secretary, Dr. Dotun Sorunke, Odedina conveyed government’s sympathy to the affected farmers, whose farms were ravaged by RHDs, saying vaccination of rabbits against the disease was not an option as other nations of the world using vaccine had continued to have outbreaks.

“We empathise with the dire situation rabbit farmers have been plunged into in the last couple of weeks and I must say that your losses have not gone unnoticed by the Prince Dapo Abiodun-led administration. Having lost over 3,000 rabbits to this outbreak, concerted effort is thus being harnessed towards integrated surveillance response, continuous education of farmers and stakeholders in the rabbit meat value-chain.

“I must emphasise that vaccination of rabbits against Rabbit Hemorrhagic Disease is not an option as other countries using vaccine have continued to have outbreaks. This is not uncorrelated with the presence of several variants of the virus and the absence of cross protection among the strains, thus lending credence to the fact that vaccine is not the solution to RHDs”, he said.

Delivering a lecture titled, “Cuniculture: where it was, where it is and where it ought to be”, the Director, Veterinary Services, Dr. Taiwo Jolaoso lamented that most rabbit farmers were not registered with the government and hardly consult veterinary doctors, which he said contributed largely to outbreak of the communicable disease in the industry.

He said unauthorised farmers were not recognised by the government and could not enjoy government’s intervention or aid.

Jolaoso described Cuniculture as a practice of raising domestic animal for meat or food, saying it must be promoted and sustained as it is a source of employment and meat supply, warning against contaminated feeds, importation of breeds from untrusted sources and poor bio-security that could destroy the industry.

One of the participants, Mr. Oluwakemi Balogun from Ijebu-Ode said he was encouraged by the seminar, saying, “I’m seeing government’s responsiveness and I’m giving Governor Dapo Abiodun 100 percent in responding to farmers’ plight,” promising to imbibe all the lessons learnt and work with the government to promote rabbit business.

Another participant, Mr. Olusola Badmus from Abeokuta appealed to government, to always off-take animal dung which he noted could be converted to useful material like fertiliser, thereby creating employment and generates income.

#EndSARS: Truth And Justice Balm For A Wounded Society —Osinbajo