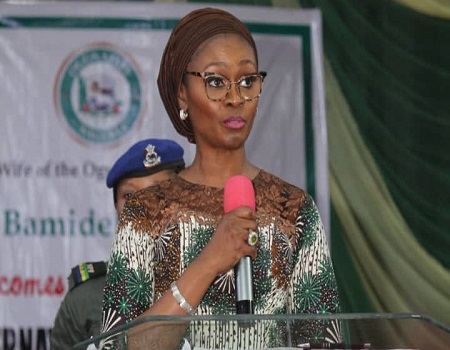 The wife of the Ogun State Governor, Mrs Bamidele Abiodun, on Tuesday, flagged off free breast, cervical screening and treatment, with a charge to women to always submit themselves for screening of the most dreadful disease.

She stated this while during the flag off organised by her office in conjunction with the Medical Women Association of Nigeria (NWAN), Ogun State chapter, at Imeko Afon Primary Health Centre, in Imeko Afon Local Government Area of the State.

Mrs Abiodun identified timely diagnosis as the first step to the treatment of cancer, advising the womenfolk to be conscious of any sign on their body and seek medical attention.

She said, “Breast and cervical cancer lead to the death of so many women. We need to be observant of any changes or signs in our body system and report such to a medical practitioner. Early detection of either breast or cervical cancer leads to avoidable death.”

The State President of MWAN, Dr. Bolanle Adefuye, in her remark commended the efforts of Mrs. Abiodun at ensuring the wellbeing of the womenfolk in the State, noting that women are the pillars of homes and their health remained paramount.

In his goodwill message, the Onimeko of Imeko, His Royal Majesty, Oba Benjamin Alabi Olanite, appreciated the Governor, Prince Dapo Abiodun for his support and love for the people of Imeko Afon, pledging his people’s support for his administration.