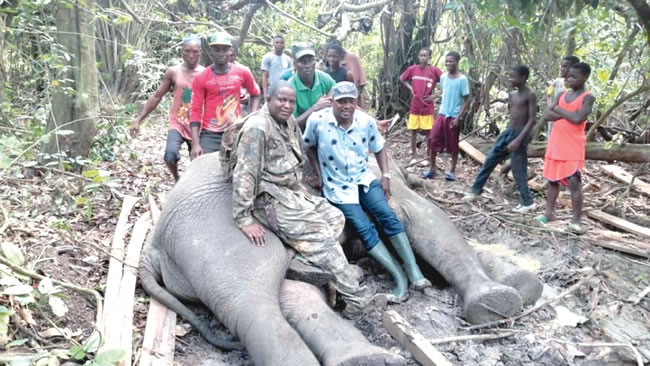 It was a bleak Monday for animal rights enthusiasts in Nigeria and the larger African continent when news filtered in that near Omo Forest, Ogun State, not far from Lagos, the Elephant Protection Initiative (EPI) would report, the fourth elephant would illegally be shot dead in two years. Unknown hunters were reported to have laid waste the large mammal, thus dwindling the once large number of the elephants regarded as the continent’s tourism magnets. Remarkably, elephants are largely recognised to have their habitats in Africa and Asia, making them the two continents’ exclusive owners. This basically underpins one of the major realities of the EPI’s clamour at ending the killings of elephants.  The EPI comprises 21 African countries determined to end the killing of elephants. The initiative argues that majority of surviving elephants live in many African countries.

Dr Ian Khama, former president of Botswana is the Chair of the EPI Leadership Council. According to him, the urgency to protect Africa’s surviving elephants is pressing. “We span the continent, from east to west, from savannah to dense forests. We are Anglophone, Francophone and Lusophone. We have plans to protect our elephants, but we know any lasting solutions must incorporate the needs of people who live alongside wildlife. In November 2020 the EPI’s secretariat, the EPI Foundation, announced a new focus on the mitigation and prevention of human-elephant conflict, in recognition of the changing threats to Africa’s elephants.

“We are delighted that the EPI is re-positioning its focus and expertise to prioritise human-elephant conflict. Together we need to find sustainable solutions, where people can prosper and our remaining elephants are safe. The collapse of tourism revenue as a result of the Covid-19 pandemic makes the challenge all the more urgent. We believe the EPI, with its continent-wide membership, is well placed to help find solutions,” he said.

Why elephants remain culturally indispensable to Africa, other continents

Elephants have been known to depict very strong cultural significance.  In all instances, elephants have evolved to be regarded as tourism icons of the African continent, thereby attracting funding that helps preserve wilderness areas.

Elephants have been the subject of religious beliefs. The Mbuti people of central Africa believe that the souls of their dead ancestors resided in elephants. Similar ideas existed among other African societies, who believed that their chiefs would be reincarnated as elephants. During the 10th century AD, the people of Igbo-Ukwu, near the Niger Delta, Nigeria, buried their leaders with elephant tusks. The animals’ religious importance is only totemic in Africa but is much more significant in Asia. In Sumatra, elephants have been associated with lightning. Likewise in Hinduism, they are linked with thunderstorms as Airavata, the father of all elephants, represents both lightning and rainbows. One of the most important Hindu deities, the elephant-headed Ganesha, is ranked equal with the supreme gods Shiva, Vishnu, and Brahma. Ganesha is associated with writers and merchants and it is believed that he can give people success as well as grant them their desires. In Buddhism, Buddha is said to have been a white elephant reincarnated as a human. In Islamic tradition, the year 570 when Muhammad was born is known as the Year of the Elephant. Elephants were thought to be religious themselves by the Romans, who believed that they worshipped the sun and stars.

They are also keystone species, playing an important role in maintaining the biodiversity of the ecosystems in which they live.

During the dry season, elephants use their tusks to dig for water. This not only allows the elephants to survive in dry environments and when droughts strike, but also provide water for other animals that share harsh habitats.

When forest elephants eat, they are known to create gaps in the vegetation. These gaps allow new plants to grow and create pathways for other smaller animals to use. They are also one of the major ways in which trees disperse their seeds; some species rely entirely upon elephants for seed dispersal.

On the savannahs, elephants feeding on tree sprouts and shrubs help to keep the plains open and able to support the plains game that inhabit these ecosystems.

Wherever they live, elephants leave dung that is full of seeds from the many plants they eat. When this dung is deposited the seeds are sown and grow into new grasses, bushes and trees, boosting the health of the savannah ecosystem.

The poaching of elephants for their ivory, meat and hides has been one of the major threats to their existence. Historically, numerous cultures made ornaments and other works of art from elephant ivory, and its use rivalled that of gold. The ivory trade contributed to the African elephant population decline in the late 20th century.

This year, African bush elephants were listed as Endangered by the International Union for Conservation of Nature (IUCN) and African forest elephants were listed as Critically Endangered.In 1979, Africa had an estimated minimum population of 1.3 million elephants, with a possible upper limit of 3.0 million. By 1989, the population was estimated to be 609,000; with 277,000 in Central Africa, 110,000 in eastern Africa, 204,000 in southern Africa, and 19,000 in western Africa. About 214,000 elephants were estimated to live in the rainforests, fewer than had previously been thought. From 1977 to 1989, elephant populations declined by 74% in East Africa. After 1987, losses in elephant numbers accelerated, and savannah populations from Cameroon to Somalia experienced a decline of 80%.

The ivory trade contributed to the African elephant population decline in the late 20th century. This prompted international bans on ivory imports, starting with the United States in June 1989, and followed by bans in other North American countries, western European countries, and Japan. Around the same time, Kenya destroyed all its ivory stocks.

Other threats to elephants include habitat destruction and fragmentation. The Asian elephant lives in areas with some of the highest human populations. Because they need larger amounts of land than other sympatric terrestrial mammals, they are the first to be affected by human encroachment. In extreme cases, elephants may be confined to small islands of forest among human-dominated landscapes. Elephants cannot coexist with humans in agricultural areas due to their size and food requirements. Elephants commonly trample and consume crops, which contributes to conflicts with humans, and both elephants and humans have died by the hundreds as a result. Mitigating these conflicts is important for conservation. One proposed solution is the provision of ‘urban corridors’ which allow the animals access to key areas.

Buhari, it’s almost getting too late to act

How FCTA, others battle COVID-19 pandemic in Abuja

The legendary Awujale Adetona at 87