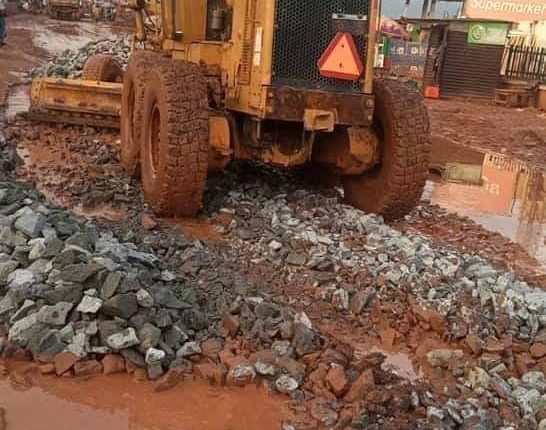 Reprieve seems to be on the way of residents of Sango, Ijoko, Alagbole and Akute, as the Ogun State Government had commenced palliative work on roads in the areas.

This would relieve the pains being experienced on a daily basis on the roads which were in bad states.

Speaking with newsmen, on Thursday, the State Commissioner for Works, M Ade Akinsanya, said that the state governor, Prince Dapo Abiodun, had directed the commencement of palliative works on the road to alleviate the suffering of residents.

Tribune Online recalled that the immediate past administration in the state led by Senator Ibikunle Amosun had planned to reconstruct the road by making it six lanes.

The project, expected to gulp N38billion, never took off the demolition of many buildings and the construction of gigantic bridges in many spots.

This, residents said, had caused severe devastation, pain and anguish as people struggled to navigate the 37-kilometre terrain.

Akinsanya explained that the Abiodun administration had been able to modify the design of the road in order to minimise additional demolition of buildings in the area.

“This project has been declared a top priority by Governor Abiodun because he is deeply concerned about the plight of the people living in the areas.

“Already, we have perfected agreement with the Lagos State government with regard to the border towns.

“We urge people of the area to bear with us as the work gets underway.

“The contractors have started work in Alagbole,” he added.

In spite of the huge investment in the water sector by the government and international organisations, water scarcity has grown to become a perennial nightmare for residents of Abeokuta, the Ogun State capital. This report x-rays the lives and experiences of residents in getting clean, potable and affordable water amidst the surge of COVID-19 cases in the state…  Ogun begins palliative work on Sango-Ijoko-Alagbole Akute road