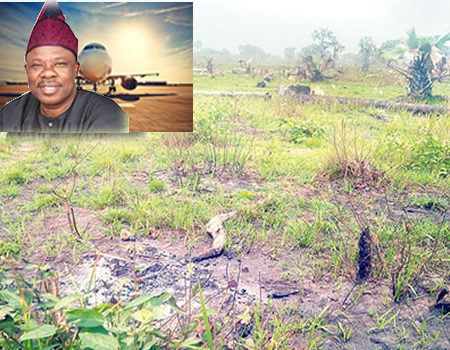 ABOVE 1,000 farmers were on Wednesday compensated by the Ogun State Government over the loss of crops and lands to the proposed agro-cargo airport at Wasinmi area of Ewekoro Local Government Area of the State.

Nigerian Tribune recalled that the state governor, Senator Ibikunle Amosun, had visited the 20 communities to be affected by the project and appealed to the settlers on the need to support the project.

Speaking at the flag off ceremony, Governor Amosun, represented by the Head of Service, Mr Abayomi Sobande, that the compensation exercise became necessary to ameliorate the pains, anxiety and hopelessness of the farmers.

He explained that the remaining 4,000 farmers would also be compensated within the next few weeks.

The governor said that a sum of N500 million has been earmarked for compensation exercise.

He said, “About half a billion naira has been set aside to settle affected farmers and landowners and you not only see it as a gesture from the government but as a means of fostering development for the State at large.”

The State Commissioner for Agriculture, Mrs Peju Adebajo, said the airport project on completion would attract foreign investors, create employment for the unemployed youths and promote the socioeconomic activities of the host communities.

She said the compensation exercise would kick-start the due process of land acquisition on the part of the State government.