Ogbomoso First Group raising the bar, giving back to society 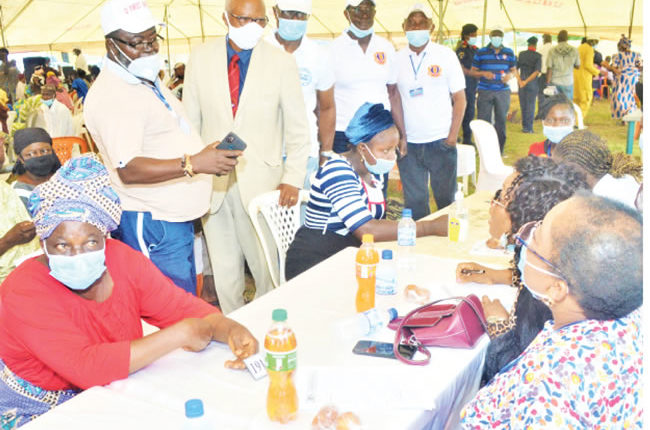 The controversies were unnecessary. The vision is paramount. That is why despite distractions, the true sons and daughters of Ogbomoso were determined to achieve their aim: to give succour to the “weak, poor and vulnerable” in the society.

It was a week-long medical and dental outreach organised by the Ogbomoso First Group, a non-governmental association of accomplished indigenes of the famous and second largest town in Oyo State.

No fewer than 3,000 men, women and children of different age tropped out with palpable enthusiasm, from 11 to 15 July, to examine their health status at the Oke Osuru facility of the O-First Group. Doctors, nurses and other medical support staff were on hand, offering their expertise and services as volunteers, to screen for coronavirus, HIV, diabetes, eye defects and traces of drug abuse. Officials of the National Drug Law Enforcement Agency, NDLEA,led by Ogbomoso Area Commander, Mallam Abubakar Sanusi were on hand to enlighten beneficiaries.

The gesture is a core mandate of the group while the medical screening and counselling was carried out in collaboration with the Second Chance Smile Global Foundation and the Ajagbe-Ajala Legacy.

“The primary objective of the medical and dental outreach is to provide free-of-charge, eye tests, issuance of eye glasses, dental extraction, medical tests, medical consultation, treatment and counseling to about three thousand indigent, weak and vulnerable persons across all demographics and both genders in Ogbomoso”, President of O-First Group, Sir Olusegun Adekunle explained.

To push its mandate, the group had earlier established the Behavioural Action Care Centre at Oke Osuru, Ogbomoso, to rehabilitate people who abuse drugs, especially the young people. It is essentially a centre that seeks to mould behaviour in an anonymous manner. The strategy is to down-play the stigma often associated with those who abuse drugs and are isolated for revival and re-integration to the society. “We are concerned with the decadent attitude of our young people and what such behaviours portend for their future. Specifically, we are committed to combat drug abuse, youthunemployment, insecurity and heightened crime rate within the society”, said Adekunle, who retired as a federal permanent secretary.

The centre has among other facilities a counseling room, intelligence room, waiting area, group discussion room, a residential area and toilet facilities. It is adequately furnished and comfortably habitable.

Dr. Segun Akanni is a medical doctor and a member of O-First Group. He came as a volunteer for community outreach “to help our people as well as give back to our community.”

He described the turnout as overwhelming. “We are having quite volumes of patients coming from the community.They are happy and we are doing consultation, giving them medication,treatment for eye problems and complaints and those with body pains, we are relieving them of their pains. Generally, people are happy and we feel fulfilled,” said Dr. Akanni.

Alhaji Abulwahab Alimi Areo is the acting Chief Imam of Ogbomoso. He came with his wife for medical screening and was full of praises for those behind the medical outreach.The gesture of O-First Group, in his opinion, is inconformitywith a pillar of Islam, which enjoins charity and paying attention to the welfare for the less-privileged.

“I am impressed with this outreach because it has no political undertone. It is purely philanthropy; it is a good form of empowerment. All we have to do is to pray for them because it is a step in the right direction as preached by Islam and other major religions,” said Imam Areo.

He said with the prevailing economic situation the group has lifted a big burden off many helpless citizens who find it hard to make ends meet.

Pioneer President, O-First Group, Otunba Adebayo Babatunde, presently a member of the board of trustees, spoke on the genesis of the group.

“The club came to be as a result of regular interaction among friends. Most of us were classmates; some of us have been together for about 60 years and as time went by, we found out that we were always meeting informally, so the idea came up that we should concretise this relationship into some kind of  a formal club. The club came to be in 2009 under a common objective to promote the interest of Ogbomoso and right there, we decided that whatever happens, Ogbomoso must come first. That’s why ourmotto says Ogbomoso First: whatever the situation, Ogbomoso’s interest must be at heart and that’s how we have been.We have empowered a few citizens. A few months ago, we distributed 100 sewing machines to indigenes of Ogbomoso and then we had several skill acquisition trainings for the youths.

“In a deliberate action to protect the future of the young people, we created the Behavioral Action Care Centre by meeting with the NDLEA. In partnership, we’ve successfully treated a number of our youths; some of them are married now and some, gainfully employed. Some of them were here when we had the formal commissioning ceremony and they gave their testimonies.”

Asked to evaluate the impact of the groups’s interventionist gesture, Otunba   Babatunde said: “As a progressive organisation, we are raising our bar. We don’t just set a mission and stand there. Once we get to a particular block, we would raise the bar and we have been doing that progressively. We’ve been meeting our objectives and when we conclude this outreach, we are going to have a review and set new targets.”

Doctors, nurses and other medical experts, retired and serving, were mobilised from Lagos, Ibadan and Ogbomoso. A good number came from Ladoke Akintola University of Technology and Bowen University Teaching Hospital, both in Ogbomoso.

When art and culture became antidote to poverty