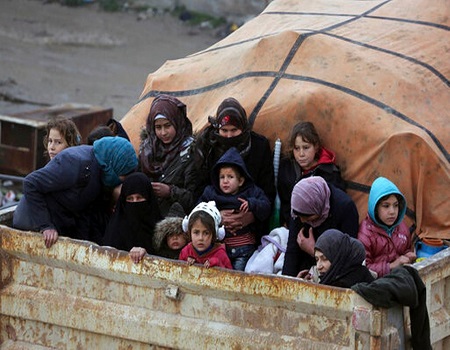 More than 700,000 people have been displaced in north-western Syria since December due to an ongoing government offensive targeting the last rebel stronghold in the country.

David Swanson, a spokesman of the UN Office for the Coordination of Humanitarian Affairs (OCHA) made the observation on Thursday.

“Since Dec. 1, over 700,000 women, children and men have been displaced from their homes in north-west Syria.

“This latest displacement compounds an already dire humanitarian situation on the ground in Idlib,’’ he added, referring to the volatile region.

According to Swanson, whole towns in the region have been emptied as an increasing number of civilians flee northward to areas deemed safer.

“Many are fleeing in open trucks or by foot, often at night, in a desperate bid to escape detection.

“All this while night-time temperatures drop below zero,’’ he added.

Russia and Turkey brokered a ceasefire in Idlib in January.

The truce collapsed as the Syrian army and allied forces have made advances in the province.

A humanitarian agency warned that conditions for civilians, forced to flee their homes in Idlib, are deteriorating “save the children at an alarming speed’’.

At least 290,000 children have been displaced from their homes as a result of the violence there, according to the group.

“The humanitarian catastrophe we’ve been warning of for years in Idlib is happening now.

“Nearly a quarter of Idlib’s population have been forced to flee their homes in just a few weeks,’’ Sonia Khush, Save the Children Syria response director, said.