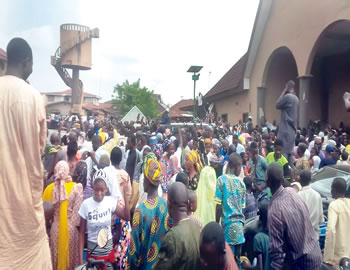 It was a grand reception for the traditional ruler of Offa town in Offa Local Government Area of Kwara State, Oba Mufutau Gbadamosi Esuwoye II, as residents of the ancient town trooped out en masse to welcome  him back to the town.

It will be recalled that the Supreme Court affirmed Oba Gbadamosi’s kingship last Friday, while he was in Saudi Arabia on lesser hajj.

Cars also lined the roads in towns and villages leading to Offa such as Osogbo, Ikirun, Okuku and Ira,  especially Ira, a distance of not more than five kilometres to the palace of the Olofa.

Onlookers,  who lined  the road, shouted “kaaabiyesiii ooo”, hailing and waving to the traditional ruler when he was sighted in the  convoy of cars, just as he waved his horse tail in appreciation.

There were  vehicles with live musical bands dishing out music to the delight of the people in the convoy and onlookers.

Many people were seen with their phones recording the movement of the monarch’s convoy. The traditional ruler stopped at a point to address and pray for the joyous crowd.

The Olofa’s convoy which gained entry into Offa town at about 2:00 p.m. did not get to the palace untill after 4:00 p.m. as the crowd made up of young men and women, the aged and children became uncontrollable.

Meanwhile, Oba  Gbadamosi has attributed his success at the Supreme Court to God.

Addressing the people of the town at his palace, on Sunday, when he returned the town, the traditional ruler said he was overwhelmed by the rousing welcome and support he received from general public, Kwara state government and the Offa people.

The monarch, who sued for peace among the people of Offa, said, “let us unite and shun any form of violence. Let’s believe it has been destined by God.

“I want to implore everyone of us not to deny anybody access to the palace. The palace is for all sons and daughters of Offa town”.

Oba Gbadamosi  also said that the support and contribution of every one was necessary for the progress and development of the  town.

Also speaking, the National President of Offa Descendants Union, Alhaji Najim Yasin, thanked everyone for their support in the last six years since the emergence of Oba Gbadamosi and when the case was in the court.