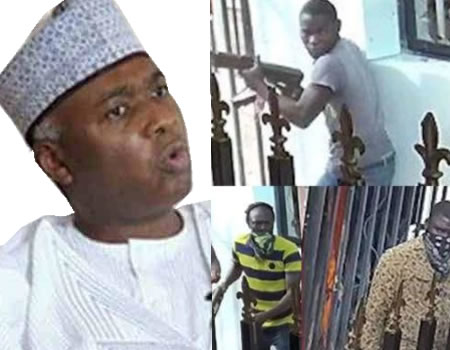 One of the five accused persons in the deadly armed robbery attack in Offa, Offa local government area of Kwara state has said that the police operatives asked him to implicate the Senate President, Dr Bukola Saraki, during an investigation into the case.

At the resumed hearing of the case in an Ilorin High Court on Friday, Ayoade Akininibosin, who was among the five accused persons standing trial in the armed robbery case, said that he was repeatedly tortured from the day he was arrested on May 15, 2018 in the special anti-robbery squad (sars) office, Ilorin till he was paraded at the police headquarters, Abuja, among other suspects.

The accused person, who said that he knows Saraki ordinarily because of his popularity like any other person and being the Senate President, said that he had contact with the state governor, Abdulfatah Ahmed, when a political movement, Kwara South Youth Movement, which he belonged, met with him to solicit for employment opportunities.

He also said that the principal suspect in the deadly armed robbery attack, Michael Adikwu, a retired police officer, was shot dead in the presence of other five accused persons, when he could not allegedly rope them, by telling the police officers that they all conspired to commit the offence.

The accused person said that five Fulani men were also brought in and shot dead inside a place in the police headquarters, Abuja, that he called theatre, where he said they were repeatedly tortured.

“My hands and legs were tied to the back and suspended in between two tables by iron rod for like one hour 30 minutes.  Then the senior police officer, Abba Kyari came around to tell me that I should say that it was the Senate President that gave us guns to rob Offa banks. I told him my life is at stake here and that I wouldn’t do such. Then, he said I should do that for them and that they’ll pay me and thereafter set me free. I disagreed and was carried back to the cell on his instruction as I couldn’t walk.

“We were all taken back to Abuja same day, May 21, 2018, and got there at midnight. It was there one of the officers told us that we were being when their own children are abroad. We were taken to a generator house at the back of Abba Kyari office. The place is called theatre. That’s where five Fulani men were killed in our presence. We were made to lie on the dead bodies on the floor. I was shot on my two legs. I was later taken to Abba Kyari office,  where he asked to know if I was ready to cooperate and I said yes and pleaded not to kill me. The next day was when Michael Adikwu was brought to identify us and say what connected us together. The dismissed officer said he didn’t know us and after much torture, he was shot dead in our presence. I was panicked, thinking I was next to die. Later, a female TV journalist was brought by a police officer with a note, saying that was what they wanted me to say, and that if not, I will “travel”, meaning, I would be killed. That was how I agreed in the presence of the female journalist, who recorded while I was also beaten at interval”, he said.

However, the prosecution counsel cross-examined Akininibosin, putting it to him that the police officer, who is one the prosecution witnesses, Hitila Hassan, did not know him before to have known all about his bio-data, his relationship with the state governor, and his political movement contained in his confessional statements.

Also, another accused person, Ibikunle Ogunleye, said he was also tortured and his confessional statements made under duress.

BREAKING: Another building collapses in Ibadan