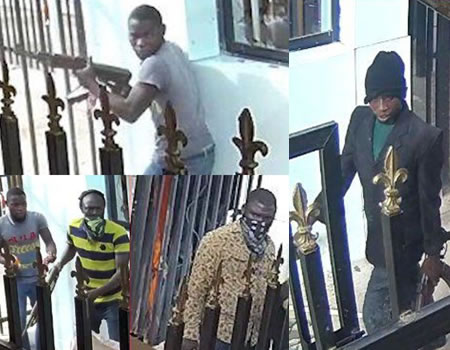 SUSPECTED five armed robbers allegedly involved in the April 5, 2018, deadly bank robbery in Offa town Kwara state have pleaded not guilty to the five-count charges preferred against them at the state High Court, Ilorin.

When the matter came up for further mention on Friday, the accused persons, Ayoade Akinibosun, Ademola Abraham, Ibikunle Ogunleye, Niyi Ogundiran and Salahu Azeez, were represented by Mathias Emeribe, as the only defence counsel.

Two of the suspects, Salahudeen Azeez and Ademola Abraham, were even dramatic while pleading their innocence in the deadly bank robbery during the court session, seeking protection of Almighty Allah from Satan to reject the accusations by saying, “ahusu bilahi mina shayitan rojeem”, when the charges were preferred against them.

The five-count charges preferred against the five suspects included conspiracy to commit robbery of five banks while armed with dangerous weapons and explosives, contrary to the 2004 Criminal Law 1 subsection 2.

Also, the five accused persons were accused of committing armed robbery on five commercial banks while armed with dangerous weapons and explosives.

Others include alleged murder of nine police officers, including three female police officers and many unnamed residents of the ancient town of Offa during deadly armed robbery attack on five banks on April 5, 2018.

Also, they were charged with culpable homicide of nine police officers and many other innocent people during the deadly bank robbery, an offence punishable with death.

The suspects were also accused of being in possession of illegal firearms, including two AK 47 rifles and other dangerous weapons.

All the five suspects, who pleaded not guilty to all the five count charges preferred against them, also said that they were not in Offa town on the day of the armed robbery.

All the accused persons also said that they did not conspire with anyone to rob the banks or had any intention to kill anyone, adding that they had never held firearms.

Earlier the court had struck out the name of the first accused person, Michael Adikwu, said to have died in police custody, from the case after the prosecution, and the state Attorney General, Kamaldeen Ajibade, filed an application to amend the charge.

Highlight of the court proceeding was the absence of a compact disc, containing confessional video evidence, which the defence counsel said he was yet to lay his hands on.

Also, the prosecution said that he was not in possession of the disc, explaining that it was still in Police headquarters, Abuja, and yet to be released to him.

The presiding judge, Halima Salman, therefore, adjourned the matter till January 7, 2019, to enable the parties ample time to be in possession of the exhibit.

Anenih for burial today in Uromi