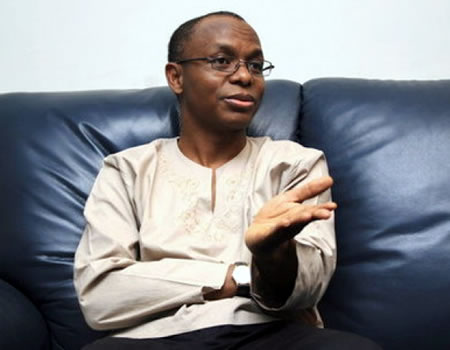 GOVERNOR Nasir el-Ruai of Kaduna State has on Fridayday in Oro, Kwara State hailed the Inspector-General of Police, Ibrahim Idris, on the ongoing investigation into recent criminal activities in the state, saying the IGP was doing an excellent job.

Giving the commendation at the 11th annual Ramadan Lecture organised by the Minister of Information, Culture and Tourism, Alhaji Lai Mohammed, who is an indigene of the town, el-Rufai praised the police boss when he was thanking Chief Imam of Oro, Sheikh Mukail Onisan, for praying for the nation and leaders.

It is recalled that the National Assembly, which had considered actions and inactions of the police boss as antithetical to democracy, recently passed a vote of no confidence against him.

“I thank the Chief Imam for his prayers for the country, President Buhari, the Inspector-General of Police who is doing an excellent job, the minister of Information and I as well as others. May God accept his prayers”, he prayed.

The Kaduna state governor, who said he was at the programme because he could not meet up with last year invitation, commended the guest lecturer, Professor Raheemson Olawale whom he said pointed out good things people do in the country and also spoke against bad practices of the people.

He prayed that God should favour President Buhari with good health as he leads the country.

Also speaking, the minister praised el-Rufai as he described him as a detribalised Nigerian that believes in merit rather than tribal or religious sentiment.

The minister also said that religious harmony brings peace and development into any community all over the world, adding that competence, capacity and merit should matter and not tribal sentiment.

Alhaji Mohammed, who said that despite the fact that 70 percent of traditional rulers in Oro community are Christians, they attend the annual Ramadan lecture together with their Muslim colleagues, adding that some editions of the programme were held at a church compound.

He described Oro community as religiously harmonious and tolerant, advising other communities of the country to emulate the community.

2023: Why Nigeria may further destabilize after Presidential election – group