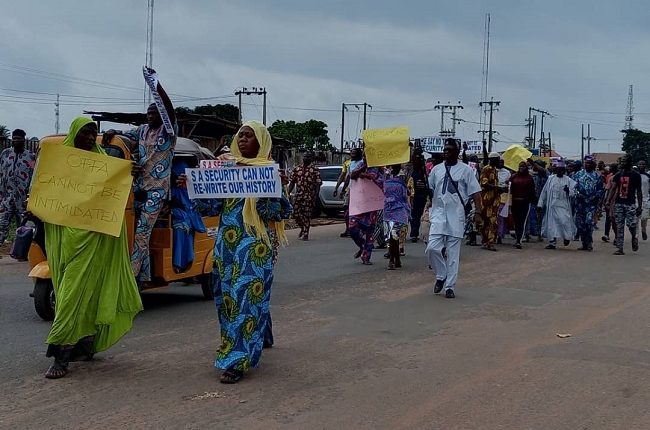 People of the Offa community in the Offa Local Government Area of Kwara State, on Wednesday, staged a peaceful protest against the alleged overzealousness of security agents deployed to the community over a recent communal clash.

It is recalled that the state government had in March 2021 imposed a curfew on Offa and Erin-Ile communities after an outbreak of communal clash between the two communities.

The people, in their scores, accused the security personnel of partisanship and one-sidedness in their dealing with them.

The protesters started their peaceful rally from the Itafa area to Avalon Hotel junction through the Federal Polytechnic, Offa carrying different placards.

Some of the placards read ‘Offa is larger than the office of a security,’ SA security cannot re-write our history,’ Offa cannot be intimidated,’ ‘Offa will resist security rascality,’ and ‘Kwara government is biased against Offa.’

Speaking with journalists, the Iyaloja General of Offa, Madam Idiat Yusuf, said that “this peaceful protest we are embarking upon is not between Offa and Erin-Ile. It is between the community members and the security personnel deployed to maintain peace between the two communities.

“The security personnel have abandoned where the government asked them to stay and maintain peace. They are supposed to stay between Offa and Erin-Ile boundary. They have started harassing and intimidating residents of Offa communities.

“They have disrupted our commercial activities. The security men were drafted to Offa and Erin-Ile in the aftermath of another communal clash that erupted between the two neighbouring communities in March this year.

“The overzealousness of the security personnel is only being borne by Offa indigenes because the Special Adviser to Governor Abdulrahman AbdulRazaq is from Erin-Ile. It is a known fact that Offa and Erin-Ile have over the years, having a running battle over land issues.

“It, therefore, means the state government ought to have appointed a neutral person to be his special adviser of security matters. The security personnel have become one-sided and partisan to the detriment of Offa.

“We are not saying the government is backing them, but what the security agents are doing is too bad and harmful to our economy. People can no longer go about their normal business in and around Federal Polytechnic area“.

Also speaking, Yusuf Babatunde AbdulAzeez, said that: “The protest has nothing to do with engaging anybody in any war. It is to express the feelings that our experience in the hands of security agents deployed to arrest the ugly situation that happened on March 3rd this year is uncalled for.

“The security agents do not allow our people to open their shops; they are extorting money from motorists. The government purported boundary position between Offa and Erin-Ile where the security agents are to stay is in Ipere-Ipinle. Our people from time immemorial had settled in this Ajegunle market. But when the crisis started Offa people vacated the place for peace to reign.

“Security agents are disallowing our commercial drivers to load their passengers. Rather than protecting us, they are inflicting more pain on us as a result of the communal clash.

“There is no freedom of movement. Of course, the state government imposed a curfew from 8 pm to 8 am between these hours, I think it is proper to allow the people to do their normal businesses?”

CLAIM: A Twitter user claims that the Arab League of Nations sent a warning message to the Nigerian government on the Biafra movement.Offa/Erin-Ile communal clash: Community protests against alleged overzealous security personnel