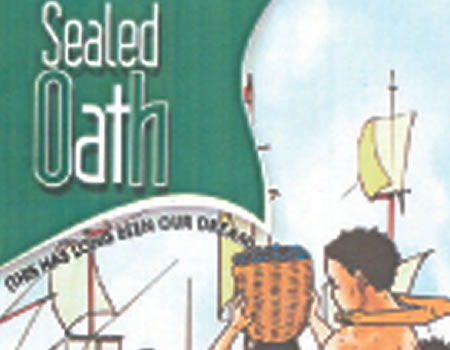 A review of Ogundeji M.A.B’s Sealed Oath by Lucky Ukperi.

SEALED Oath is a novel that represents the story of Africans’ journey into slavery, with emphasis on the movement of one character, Arikuyeri. The life of Arikuyeri personifies the resistance to certain African cultural traditions which the change in society makes to be interrogated by the people, especially the younger generation. The story begins from the death of the King of Onikoko and the subsequent death of the Akeju, the Abobaku (one who dies with the king). Akeju celebrates his going to the ancestors with the king without any fear or worries. The novel captures the dilemma of Akeju’s son, Arikuyeri, who takes over from his father when a new king ascends the throne and shockingly, the new king falls sick almost immediately prompting fears of his imminent death. In order to forestall dying with the king, Arikuyeri embarks on a journey of survival, as he and his wife absconds from their community.

The story presents Arikuyeri’s journey and uses it to reflect on the makeup of his society. We discover that as he seeks succour from the pursuing warriors from Onikoko, he has to flee different towns eventually he gets to Umuazu, an Igbo-speaking community, there the revelation comes that there is a kinship relationship between Arikuyeri and Ikpechukwu. The author, Ogundeji, interrogates the sale of Africans by Africans to Europeans as slaves as he looks at the many intercommunal wars that plagued the early African indigenous nations and how Africans derived economic benefits by selling fellow Africans on a journey of no return.

In the Sealed Oath, the story of the Middle Passage is succinctly captured as Arikuyeri and other slaves are transported from Africa to the Americas to work in plantations. The slaves’ fight for freedom spearheaded by Karonwi and Teniola succeeds though Arikuyeri refuses to join them until he eventually gets his freedom five years later when slave trade is abolished.

The novel concludes on Arikuyeri’s transformation, which starts with his change of name to Johnson Black and his gradual rise in the anti-slavery movement as a result of his admission to a school where he meets other blacks and they rise up against racism despite the end of slave trade. Arikuyeri now known as Johnson Black uses his influence as an elder statesman in his political party to bring about the emergence of the first black man as president of the country called Sam Leo.

Ogundeji’s Sealed Oath brings out the cultural beliefs of Africans, especially those of the Yoruba and Igbo as the characters take us into these different environments. The novel is replete with subplots which could be confusing if the novel is not read closely. The language is easy to follow although there are instances where editing lapses come out, which we hope would be rectified in subsequent publication to make the book better than its present copy.

However, the story is timely especially as blacks still suffer instances of racism and other attacks in the western world; the author is able to show that many of these blacks have no say in their being in those environments. Most importantly, Sealed Oath is used to advocate a mindset that sees all humans as one — transcending skin colour — in order to create a just society.