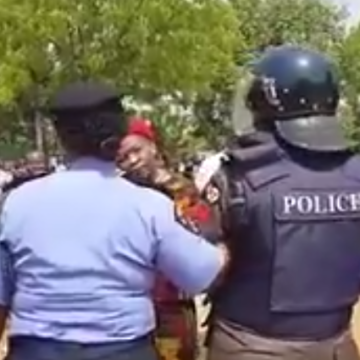 Convener of the Bring Back Our Girls, Dr Oby Ezekwesili, was today detained and released by officers of the Nigerian Police during a peaceful demonstration for the abducted Chibok girls in Abuja.

Dr Ezekwesili earlier took to her Twitter handle to announce the infringement of her human right to peaceful movement, stating that the police could not come up with a reason for interrupting the protest.

She wrote that “Without stating the reason of our arrest and detention, Commissioner of Police at the FCT, CP Bello, has asked us to be let out of their station.

“We insisted on a formal charge and release, but his response? ‘I am the Commissioner&now release you to go.'”

What are we demanding? #BringBackOurGirls
What are we asking?
The Truth. Nothing but the truth pic.twitter.com/NGJGUCKhZg

“Tomorrow morning, we shall continue with our #BBOGMarchToTheVilla that was flagrantly and lawlessly interrupted by the police today,” she said.

Thanks friends. We have left the FCT Police Command.

Tomorrow morning, WE SHALL continue with our .@BBOG_Nigeria #BBOGMarchToTheVilla that was FLAGRANTLY and LAWLESSLY INTERRUPTED by the @PoliceNG today.

WE REFUSE THAT ANYONE SHOULD INFRINGE ON OUR CONSTITUTIONAL FREEDOMS.