(OBITUARY): Abba Kyari, from boardroom guru to becoming the ‘heart’ of Buhari’s government 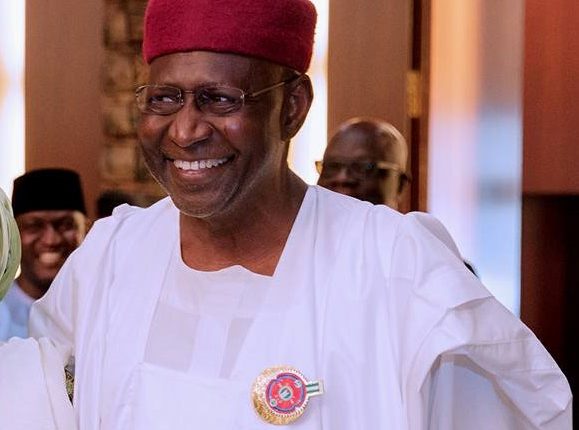 The Presidency on Saturday morning announced the death of the Chief of Staff to President Muhammadu Buhari, Alhaji Abba Kyari, after battling with coronavirus in a hospital said to be in Lagos.

Kyari was a powerful force in the President Buhari’s government and as the Chief of Staff, he wielded enormous power and was also a power broker in the North. However, not many people know he was a boradroom guru, rising to very high positions in banks and other multinational companies.

Kyari worked for the law firm Fani-Kayode and Sowemimo for some time after his return to Nigeria and from 1988 to 1990, he was Editor with the New Africa Holdings Limited Kaduna.

In 1990, he served as a Commissioner for Forestry and Animal Resources in Borno State.

From 1990 to 1995, Kyari was the secretary to the board of African International Bank Limited, a subsidiary of Bank of Credit and Commerce International.

Kyari was an executive director in charge of management services at the United Bank for Africa, and was later appointed the chief executive officer. In 2002, he was appointed a board director of Unilever Nigeria, and later served on the board of Exxon Mobil Nigeria.

In August 2015, Kyari was appointed Chief of Staff to President Muhammadu Buhari.

Kyari was an influential figure within the Buhari administration. During the administration’s first term, he worked mainly behind the scenes to implement the president’s agenda. In 2019 with Buhari’s re-election for a second term, he ordered his cabinet to channel all requests through Kyari’s office, further enhancing his influence within government circles, and being labelled as the de facto head of government.

In 2017, following a leaked memo, Kyari became embroiled in a public argument with the Head of Civil Service, Winnifred Oyo-Ita who was later removed from office and arrested. In 2020, in another leaked memo, Babagana Monguno, the National Security Adviser, accused Kyari of meddling in matters of national security.

Kyari was married to the sister-in-law of Alhaji Ibrahim Tahir, another influential northern politician and had four children.

On March 24, 2020, it was made public that Kyari tested positive for COVID-19 on March 23, following an official trip to Germany nine days before.

How Nigerians Reacted To News Of Abba Kyari’s Death
Nigerians have started reacting to the sudden death of the Chief of Staff to President Muhammadu Buhari, Mallam Abba Kyari who died after being confirmed to have tested positive for coronavirus (COVID-19) on Tuesday, March 24, 2020… Read full story

COVID-19: At Least 300,000 Africans May Die In Pandemic — UN Agency
The COVID-19 pandemic will likely kill at least 300,000 Africans and risks pushing 29 million into extreme poverty, the UN Economic Commission for Africa (UNECA) said on Friday, calling for a $100 billion safety net for the continent, Reuters reports… Read full story