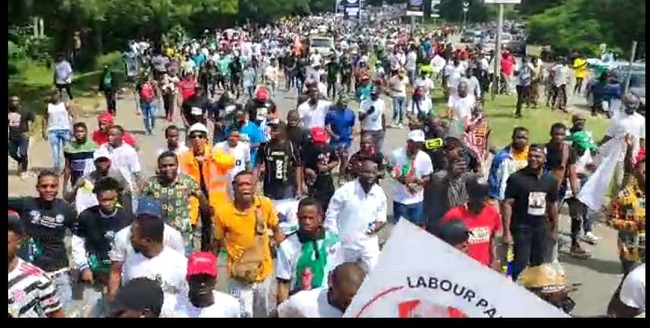 Thousands of Nigerian Youth have come out, on the streets of Abuja to show their support for the presidential candidate of the Labour Party, Mr Peter Obi.

The rally which took off at the Millennium Park will terminate at the City gate covering 8.7 kilometres, where some of the speakers who would address the rally are already waiting while putting finishing touches to the sound system.

GOVERNOR Nyesom Wike of Rivers State, on Friday, in a live television broadcast acknowledged that he is not “bigger” than the Peoples Democratic Party (PDP) and asked leaders of the party to thank him for demanding equity and fairness.….

GOVERNMENTS of South-West states are considering dragging the Federal Government to court over its refusal to grant the request for their security outfit, Amotekun, to be licensed to bear arms.…

FRANCIS Eze spent nearly a decade at one of Nigeria’s biggest banks working for a salary far lower than the one he’d negotiated in his interview. As a bachelor and then as a newlywed, he found a way to manage on a tighter budget.…

Bullying: ‘I Used Iron Sponge To Wash My Dark Skin Out’

SOS-SAM: Queen Elizabeth: See What We’ve Done To Our Own Culture?