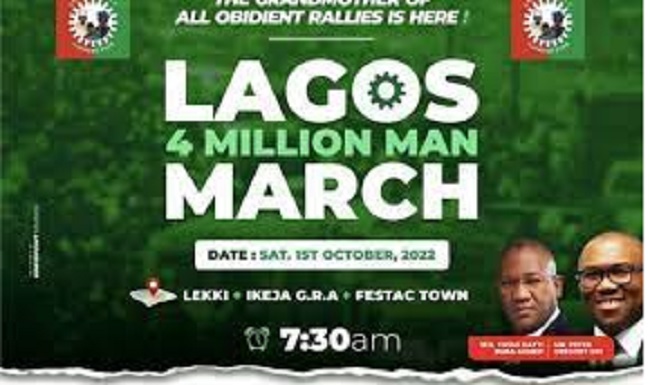 Supporters of the presidential candidate of the Labour Party, Peter Obi, on Saturday, converged on strategic locations across Lagos state in a 4-million-man solidarity rally.

The rally which was held simultaneously in Lekki, Surulere, Ikeja and Festac, on the country’s Independence Day, according to conveners, was to garner support for the presidential ambition of the former Governor of Anambra State, Peter Obi and his running mate, Yusuff Baba-Ahmed.

In Ikeja, Lagos, hundreds of supporters of the Obidients Movement, defied the early downpour to converge at the Archbishop vining memorial church for the procession.

They chanted the national anthem and waved the flags and carried banners, posters and other paraphernalia with various inscriptions.

Some of the supporters who spoke with Sunday Tribune expressed confidence in the emergence of the Labour Party candidate as the next president of the country.

Another supporter, Nonso Abraham, said, “With togetherness, Nigeria will be great again. This is why we are here under the rain to declare our support for Peter Obi because we know he can take Nigeria to the promised land.”

A Federal High Court ruling in Lagos, on Wednesday, had ruled against any form of convergence at the Lekki Tollgate save for passing through on their way to Falomo.