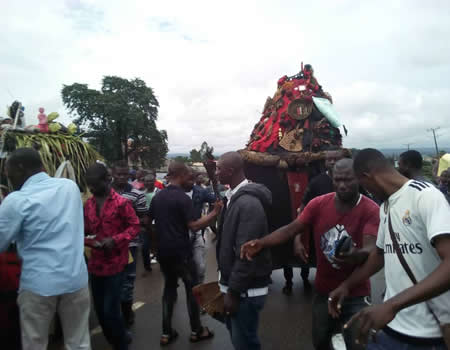 Share
Governor Willie Obiano of Anambra state has said he will deal decisively with any community that tarnishes the image of its traditional ruler in the state, just as masquerades and some groups staged a solidarity protest in support of the Igwe of Umuanya community, Igwe Kris Onyekwuje.
The governor gave the threat on Friday through his Special Adviser on Security, Safety and Emergency, Hon. Chikodi Anarah, during a solidarity march by the people of Umunya in the Oyi Local Government Area of the state for their monarch, Igwe Kris Onyekwuje.
The pro-Igwe had in the company of masquerades stormed the government House along Enugu/Onitsha expressway, denying the allegations that Igwe Kris Onyekwuluje was harassing, intimidating and grabbing their land.
According to the governor, communities in the state should accord desired respect to their traditional rulers.
He said his government would not take it lightly with any community in the state that would belittle its monarch for whatever reason.
Recalled the people of Odumodu community of Umuanya, comprising mostly women and children had last Monday protested to the government house, Awka, alleging intimidation and indiscriminate arrest of their sons and husbands by Igwe Onyekwuluje.
They accused the monarch of land grabbing, noting that no fewer than five persons had been detained in police on the order of the monarch.
But on Friday addressing, the pro-Onyekwluje group in solidarity protest at the Government House, the governor called for respect for constituted authorities in the state , while assuring for quick intervention on the matter to ensure justice and peace.

“We need to respect our monarchs the way it is done in other parts of the country. If you go to the West and Northern parts of the country, you will notice that the traditional institutions are revered. We must do the same here under my watch.
“When some of the protesters came here last Monday to protest against the monarch, I told them that I must hear from the other side because it takes two to tango.
” That day, if you were here you would think the monarch was a devil, but today we have seen you people, I can say that Igwe is not the problem.
” The Igwe is not claiming anybody’s land; he just intervenes to make peace. Nobody should denigrate him for that. I assure that we shall handle the matter and ensure peace reigns” he said.
Earlier, the spokesperson for Pro-Onyekwuluje Elder (ichie) solidarity protest, Ichie Wilson Otuka informed the governor that those accusing their monarch of land grabbing are people who want to be selling the Community land for their personal pocket.
We are here today in solidarity to our Igwe because some people came here last Monday to report him of intimidating, harassing and detaining them. The problem started when some group came to complain that they were being maltreated by some people in the community over land and the Igwe just intervene to make peace but this people insisted that Igwe has no hands in the land since he is not from odumodu Community.
There is nowhere the land issue is discussed without the traditional ruler. We are here to tell the government and the public that the Igwe did not create any problem but those who want to milk the Community are stoking the crises.
we want the government to quickly intervene to save the community from imment blood shed.
We are supporting our Igwe on his drive to make peace in the land, but this group does not want Igwe on the matter for their selfish reasons” he stated.