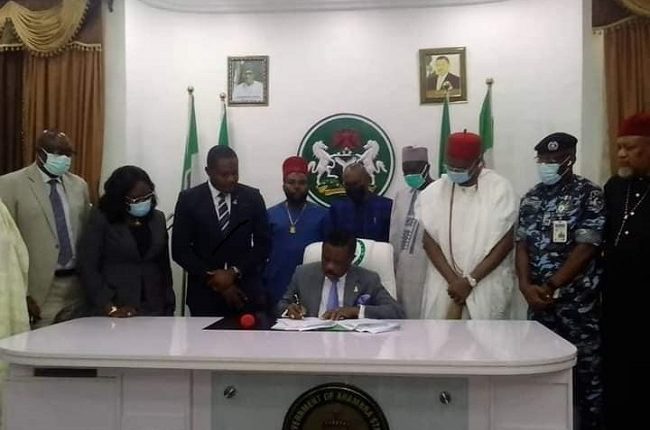 Share
Anambra State Governor,  Willie Obiano, has assented to the bill to prohibit and abolish open and nomadic cattle and other livestock grazing and rearing, establish cattle and other livestock ranches in the state and provide for related matters in Anambra State.
The signing ceremony was performed on Friday, October 22, 2021, at the Governor’s Lodge, Amawbia, Anambra State.
Performing the function, Governor Obiano, who appreciated the state House of Assembly for the expeditious passage, said that the establishment of the law would hopefully enable the entrenchment of peace, though the state had been managing crisis for a very long time which was only short term measure, stressing that the law enforcement agents had been directed to implement it.
Present at the brief ceremony were the Attorney General and Commissioner for Justice, Barrister Uju Nworgu, Secretary to the State Government, Professor Solo Chukwulobelu, Commissioner for Police, Mr Echeng Echeng, Commissioner for Agriculture, Chief Nnamdi Onkwuba, Chairman of South East Council of Traditional Rulers, Igwe Nnaemeka Achebe, Traditional Ruler of Okpuno, Igwe Sunday Okafor, Traditional Ruler of Mbaukwu, Igwe Peter Anugwu, Member representing Awka North at the State House of Assembly, House Committee Chairman on Agriculture, Chief John Nwokoye, Members of the Hausa Community in the state, among others.

Nigeria is winning the war against insecurity ― Senator Ndume