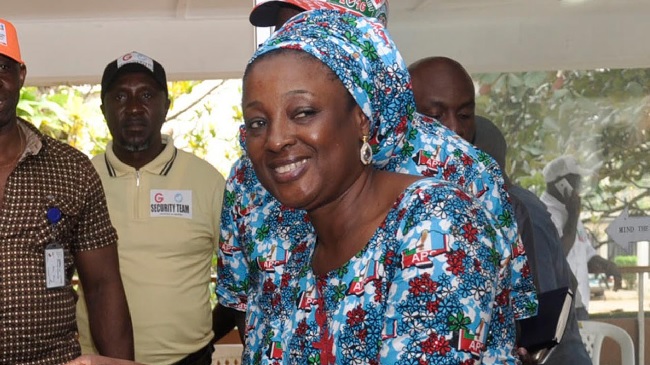 The wife of Edo State governor, Mrs Betty Obaseki, on Thursday, harped on youth empowerment as the antidote to the illegal migration of youths in the state to European countries such as Spain and Italy, where they are subjected to all sorts of inhuman treatments.

Mrs Obaseki who made the call while speaking at the presentation of equipment to first batch graduands of the skill acquisition programme under the Migration II Project organised by the ActionAid Nigeria noted that many of the youths who sought succour abroad did so because they could not get enough satisfaction from the government and the society at large.

Commending the ActionAid group for its initiative at training and equipping their graduands with the tools needed to practise the skills learnt, said that it was gratifying to note that a group of private individuals could seek to assist the government in carrying out some of its social responsibility to the people.

“I express a deep sense of appreciation to ActionAid for its efforts. It is gratifying to see people come out to help the government to achieve its goals. The intervention of ActionAid will help to stem the tide of illegal migration because this will show our youths that they have potential that they can utilise here in this country instead of travelling abroad. Our youths migrate to other places as a result of failure on the part of past administrations and failure of the parents,” she stressed.

According to her, “migration happens because the country has failed to meet the needs of the youths and this is why we must commend the recent efforts of the Federal Government and the Edo State Government at empowering the youth. The Edo State Government is doing everything to steer the people in the right direction and actualise their true potentials. The government will continue to lend its support to initiatives such as the ActionAid.”

Speaking earlier, the Country Director of ActionAid, Ebe Obi, said that the Migration Project II, otherwise known as Dare to Hope in Edo State, “seeks to create alternatives to irregular migration through socio-economic empowerment and sensitisation.”

“ActionAid works in 4 countries across the globe. In Edo State, we have been complementing the efforts of the state government in child protection, youth empowerment and ending the menace of gender-based violence and irregular migration since 2013. Our assessments have shown that economic reasons are the main push factor for irregular migration,” she submitted.

According to her, at the end of the first batch training, 1,000 beneficiaries had been trained, equipped and mentored in various skills such as; hairdressing, fish farming, makeup artistry; shoe and bag making; poultry; aluminium fabrication and bead making, with the overall objective of contributing “to improving socio-economic conditions of young people so that they can make informed and voluntary choices, instead of being forced by economic forces to migrate.”

The highlight of the event was the presentation of certificates and equipment for the various skills to the beneficiaries by Mrs Obaseki.

The last time Nigeria recorded such a low figure was in the December 27 to January 2 week, when it reported 5,681 cases…Obaseki’s wife harps on youth empowerment as panacea for illegal migration