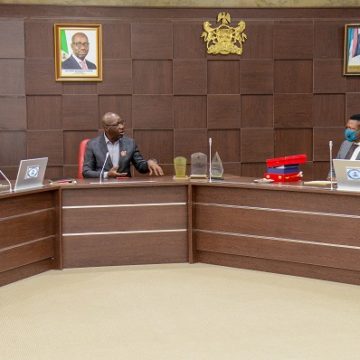 Governor, Godwin Obaseki of Edo State, on Wednesday, signed the 2022 Appropriation Bill, pegged at N222.6bn, into law after the bill was passed by the Edo State House of Assembly.

Governor Obaseki said that the budget, christened “Budget of Renewal, Hope and Growth”, witnessed an increase of about N8.4 billion as against the N214.2 billion initially presented to the Assembly.

The governor, who signed the budget at the Exco Chambers, Government House, Benin City, commended the state House of Assembly for giving speedy consideration to the bill.

“Let me express my profound gratitude for the cooperation that we have continued to receive from you. In your wisdom, you marginally increased the size of the appropriation bill that we brought to you.

“Knowing that next year is likely to be quite an inflationary year and with trends that we see today, we see the Naira weakening further; this means that we need enough Naira to accomplish the same set of things we did last year.

“So, we understand the wisdom in you now increasing the proposal that we brought to you. We also want to thank you because even though you made an adjustment, most of that adjustment went into capital expenditure, rather than recurrent,” the governor noted.

Obaseki added that the increment had put the state’s capital expenditure “at an all-time high relative to recurrent expenditure. We really want to thank you for aligning with our dreams of making Edo great again. Except we spend more money on capital expenditure, we cannot take our people out of poverty.

“Realising that next year there is the National Sports Festival, you have reminded us that we need to put a bit more appropriation in the area of sports to encourage our young ones to participate.”

“We want to assure you that as an executive, we are fine-tuning the government’s Internally Generated Revenue (IGR) mechanism because that is the trick in attaining this budget size. We are pretty confident that Edo people want to pay tax and we want to ensure that the taxes they pay go into government coffers for developmental purposes,” Obaseki noted.

Earlier, the speaker, Edo State House of Assembly, Marcus Onobun, said that the Assembly “went through the budget and consulted with the constituents across the state, made sure that their inputs were reflected, and also zeroed in on realizing the MEGA Agenda at the grassroots.

The speaker added that “with consultation with the Ministry of Budget, we concluded to slightly increase the budget size from the initial amount to the current size, which has now been passed into law.”

Verdict: The claim is false. The content of the article published by these online platforms is not new; it has been recirculated several times and has been debunked.Obaseki signs N222.6bn 2022 appropriation bill into law