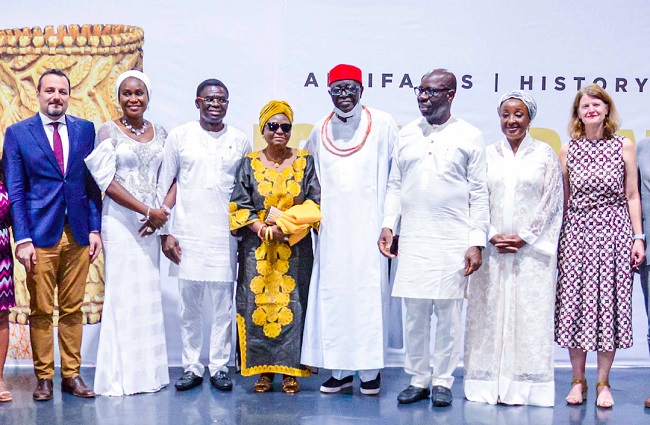 Governor Godwin Obaseki of Edo State has said that the state government now had in its possession, the digital records of 5,246 pieces of Benin artefacts in 131 locations across the globe, describing it as a feat to be proud of.

This was just as the governor declared that the recently launched Digital Benin Museum website was a platform with the largest digital collections of Benin artefacts.

Governor Obaseki made the revelations during the launching of the digital museum, which is part of the events marking the 2022 edition of the Alaghodaro Summit, at the Sir Victor Uwaifo Creative Hub, Airport Road, in Benin City, Edo State.

Speaking at the event, Obaseki said: “We suggested having a catalogue of all Benin artworks scattered around the world a while back. Today, I am so glad and fulfilled that five years on, we now have digital records of 5,246 pieces of Benin and Edo artworks in 131 locations across the globe. This is a feat to be proud of.

“Digital Benin is now the largest Museum in the world for Benin collections. It’s a virtual Museum which will tell you anything you need to know about Benin’s history and future. Go to the website and every piece of Benin artwork located anywhere in the world can be seen. You can see the artwork, the meaning and the locations.

“This is a significant milestone we have achieved. This project is very significant to the people of the kingdom. We thank Prof. Gregory Akenzua and members of the Benin Dialog Group who, over the last two decades, have kept on the pressure and the dialogue on how to restitute and return the artworks taken away after the invasion of 1897.

“I met the Benin Dialog Group having this debate and discussion for the last 18 years and later joined them to ensure we achieve the aims of the group. We joined the group in 2017, and in 2018, we went outside the country to join the conversation and address the issues confronting the return of the artwork.

“The invasion of the Kingdom destroyed our history which was unbroken for 1,000 years. It suddenly got broken and it’s taken us over a century to begin to understand our place in the world. For more than 100 years, our artworks have been with strangers who do not understand the import, significance and importance of these works.

“These works serve as our ambassador all over the world and the concern for us is ownership, as these are our properties taken from us, at least let it be returned so that we will have a legal title.

“This success is all about collaboration and the achievement gladdens our hearts. I appreciate our European partners who have been really understanding, particularly the German, French and Italian governments. The future is about technology and Digital Benin rests on a technology platform.”

The governor said the state government was ready to continue to work with partners for the continuation and sustainability of the Digital Benin website, noting, “We have designed a new cultural district for Edo State. Edo and Benin City are the natural cultural capital of West Africa. Within this cultural district, we would have a minimum of three museums and we already have one which will be upgraded while two others (The Benin Royal Museum and EMOWAA).

“The cultural district which is going to be sited on over 10,000 hectares of land will have other facilities like hotels, spaces for offices, centre for young artists, among others. I want to acknowledge a young Edo personality, Tracy Eboigbodin, who won a master-chef competition in Italy, making Edo and Nigeria proud for her achievement in Europe.”

In his welcome address, the Commissioner for Arts, Culture, Tourism and Diaspora Affairs, Mr Prince Bamidele Obaitan, thanked the governor for his visionary leadership style.

He noted that the occasion of the launch of Digital Benin “provides an opportunity to share with the people the remarkable progress made by the administration of Governor Obaseki in the arts and culture space.

“This project is a platform for people to know more about the rich cultural heritage of the Benin people and its artefacts scattered around the world”, Obaitan enthused.

In her remarks at the occasion, the Director, Museum am Rothenbanm Kulturer and Kunste der Welt-MARKK, Germany, Professor Barbara Plankensteiner, commended Governor Obaseki and the Oba of Benin for working hard to recover the stolen Benin artefacts scattered around the globe.

She noted that the launch of the Digital Benin platform was a welcome development as it provided a channel to showcase the rich cultural heritage of the people of Benin Kingdom.

“This platform will connect over 5,000 Benin artefacts in 131 museums scattered around 20 countries of the world”, she intoned.

A member of the MARKK Team, Dr Anne Luther, presented to the audience, the Digital Benin website, noting that “it is a place to visit to know more about the history of the Benin Kingdom.”