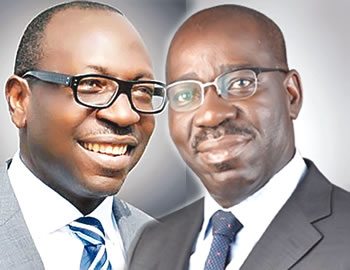 Family members of the two leading candidates in the September 19 governorship election in Edo State appear not to heed the old saying which holds that blood is thicker than water as the Obaseki and Ize-Iyamu Families seem to be backing rival candidates.

Against the backdrop of the gale of defection and resignations of his aides and some commissioners, the governor’s kinsman, Mr Victor Obaseki, a cousin admitted that even as a close family member, he won’t be getting the support of the larger Obaseki Family.

He said: ”I am here in the company of my cousins to support Pastor Osagie Ize-Iyamu. Godwin Nogheghase Obaseki, the executive governor, is our cousin. Generally, the Obasekis have their own way of doing things; we are a different branch of faith, we are supporting our brother, Pastor Osagie Ize-Iyamu with unalloyed support fully for him.

“I have supported him before, and I would continue to support him, we would do all our campaigns for him without let or hindrance, fully from the bottom of our hearts.”

Elated, ze-Iyamu expressed his delight at the support of the Obaseki family, stressing that the support was a confirmation of the poor administration that Obaseki has given to Edo state in the past four years.

He showered encomiums on them for not allowing sentiments becloud their judgement in their support for who is right to lead the state in the next four years.

“Let me thank you for the endorsement. I have known some of you for many years and I am very happy that politics has not strained our relationship.”

ALSO READ: Rotation can end after South gets power in 2023 ― Arewa youths

“It is true as Osaro said that far away in New York, I had the opportunity of meeting with him and other Edomites, where I shared my ambition.
Osaro has been a good gentleman and humble man, and has always declared his support.”

“He came out this morning to say, Godwin has not done well, and not because they answer the same surname, would continue to support him and go through the very poor performance that we have seen in the past four years.”

“They will not allow the sentiments or even deceit of brotherhood make them vote for somebody they know is not qualified for a position.”

For the Ize-Iyamus, a kinsman member who gave his name as Osaze said that his family was unanimous about the choice of Obaseki as he has fixed roads that lead to their houses without asking questions about the people who live in such neighbourhoods

He noted that the APC has too much baggage that compromises his candidacy for the gubernatorial election.

He added: “Obaseki is our preferred candidate at this time. Ize-Iyamu, compared to the technocrat governor, is no match, by any standards.”

Osazee continued: “Obaseki has fixed roads that lead to our houses without asking questions about the people who live in such neighbourhoods. Our public schools are looking better than private schools in Edo State and we have not had a single strike by workers in the state under Obaseki.”

“More importantly, members of the Ize-Iyamu family who are retirees have been receiving their monthly pension without stress under Obaseki.

“These are things we did not enjoy when Osagie Ize-Iyamu was chief of staff and secretary to the state government.”

Rotation can end after South gets power in 2023 ― Arewa youths