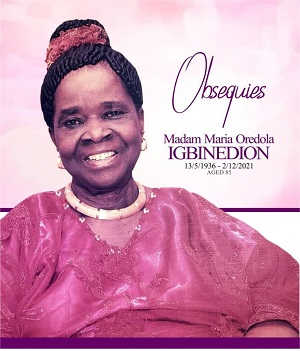 Governor Godwin Obaseki of Edo State on Saturday comisserated with the former governor of the state, Chief Lucky Igbinedion, on the passing away of his mother, Mrs Maria Oredola Igbinedion, who died on December 2, at the age of 85.

Also, a  politician in the state and former governorship aspirant, Mr. Kenneth Imansuangbon, sympathised with Chief Lucky Igbinedion and the entire Igbinedion family on the woman’s death.

Meanwhile, the Igbinedion family has announced that Mrs Igbinedion would be buried on December 10 in Benin, the state capital.

The funeral programme, which was released on Saturday in Benin, indicated that there would be a service of songs on December 9, between 4 p.m. and 6 p.m., while funeral service would on December 10, at St. Augustine Catholic Church, Ukhegie.

Governor Obaseki, in his condolences message to the Igbinedion family, stated that the deceased would be remembered for her wise counsel, charming character and love for God.

“I am saddened by the sad news of the passing of your dearly beloved mother, Mrs. Maria Oredola Igbinedion. Mama was loving and compassionate, giving herself freely to causes she cared deeply about and worked assiduously to make society better for all.

“She was a great mother, a loving wife and a conscientious community leader. Her kindness and warmth shone through her charitable endeavours and commitment to uplifting members of her immediate community.

“Mama would be remembered for her wise counsel, charming character and love for God.

“On behalf of the government and people of Edo State, I extend heartfelt condolences to Dr. Lucky Igbinedion, the Igbinedion family, friends and associates over Mama’s passing and pray that God will grant all, the fortitude to bear this irreparable loss.”

Also, Imansuangbon, in his condolence message, stated that “Mama Governor,” as the deceased was called in her lifetime, was a rare breed.

The philanthropist noted that Mrs Igbinedion was a good mother, wonderful mentor and caregiver not only to her children, but to many others that came in contact with her.

He said: “From my experience in my relationship with some of Mama’s children: Lucky, Bright and Charles, it shows that they are well brought up and derive joy in impacting positively on mankind.

“My prayer is that her children continue to flourish in their endeavours, while they carry on where she left, even as they bear the weight of the irreparable loss.”

How we are adapting to digital movie distribution —Corporate Pictures boss, Alhaji Abdulrasaq