State of the nation: After 8 hours meeting, OBJ, Abdulsalami, Ooni, Sultan, others to meet Buhari 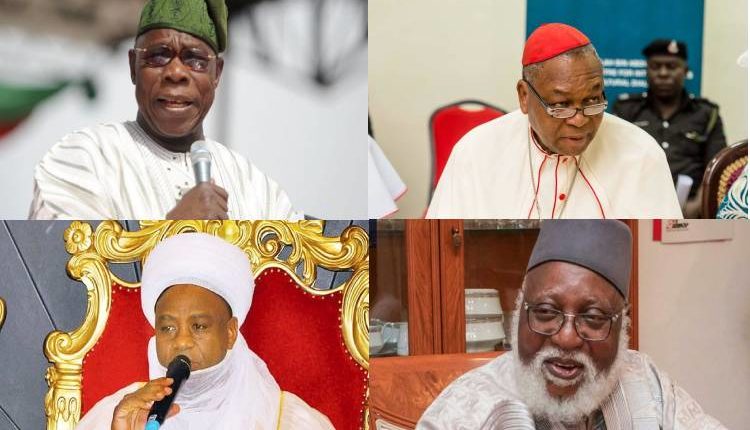 The meeting of the Committee for the Goodness of Nigeria (CGN) was held behind closed door in Abuja on Thursday.

The CGN is a coalition that included the Interface Initiative for Peace led by the Sultan of Sokoto, Alhaji Muhammad Sa’ad Abubakar and former Catholic Archbishop of Abuja, John Cardinal Onaiyekan; National Peace Committee under the leadership of former military Head of State, General Abdulsalami Abubakar and the Sociocultural Consultative Committee led by Chief Olusegun Obasanjo.

The eminent Nigerians met behind closed doors at the Transcorp Hilton Conference room.

Also sighted at the meeting were President of the Nigeria Labour Congress, Ayuba Wabba and President of Ohanaeze Ndi’gbo, Professor Ralph Obiozor.

The eminent Nigerians declined comments at the end of the closed-door meeting which lasted for over eight hours.

No communique was issued at the end of the meeting but the spokesman of the CGN, Ahmed Magaji, told newsmen that a communique would be issued. It was however not released as of press time last night.

Checks revealed that the eminent Nigerians have scheduled a meeting with President Muhammadu Buhari. Asked to confirm the date for the audience with President Buhari, Chief Ogbeh said, “no time has been fixed yet.”

In spite of the huge investment in the water sector by the government and international organisations, water scarcity has grown to become a perennial nightmare for residents of Abeokuta, the Ogun State capital. This report x-rays the lives and experiences of residents in getting clean, potable and affordable water amidst the surge of COVID-19 cases in the state…After 8 hours meeting  After 8 hours meeting

The Lagos-Ibadan railway was inaugurated recently for a full paid operation by the Nigerian Railway Corporation after about a year of free test-run. Our reporter joined the train to and fro Lagos from Ibadan and tells his experience in this report…After 8 hours meeting  After 8 hours meeting

Restriction of Nigerians from reporting, disseminating information has no place in democracy, US tells FG

No going back on water bill, FG insists