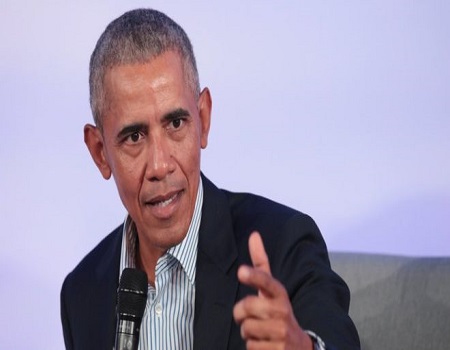 Barack Obama has made a rare intervention in the 2020 White House race to blast a “despicable” racially charged attack ad against Joe Biden.

A pro-Trump group put out the clip that twists Mr Obama’s own words in order to undermine the Democratic contender.

Mr Biden is hoping the black vote in South Carolina’s primary on Saturday will revive his campaign.

Though Mr Biden was his vice-president, Mr Obama has observed neutrality in the race, refusing to endorse a contender.

Joe Biden is one of eight candidates remaining in the contest to become the Democratic candidate who will take on President Donald Trump, a Republican, in November’s election.

A female narrator introduces audio from former US President Obama’s 1995 memoir, Dreams from My Father, in which he reads a quotation from a Chicago barber who had expressed cynicism about Democratic politics.

“But when the so-called black committeemen came around election time, we’d all line up and vote the straight Democratic ticket.

“Sell our souls for a Christmas turkey.”

But the hairdresser cited by Mr Obama was talking about the Illinois city’s first black mayor, not Mr Biden.

ALSO READ: Guinea-Bissau candidate swears himself in as new president

Captions flash up on screen during the ad attacking Mr Biden’s record on race. He is currently the frontrunner in the South Carolina race, though his campaign is flagging nationally.

“This despicable ad is straight out of the Republican disinformation playbook,” Katie Hill, Obama’s communications director, said in a statement.

“And it’s clearly designed to suppress turnout among minority voters in South Carolina by taking President Obama’s voice out of context and twisting his words to mislead viewers.

“In the interest of truth in advertising, we are calling on TV stations to take this ad down and stop playing into the hands of bad actors who seek to sow division and confusion among the electorate.”

Ms Hill reiterated that Mr Obama “has several friends in this race, including, of course, his own esteemed vice-president”, but “has no plans to endorse in the primary”.

The clip was put out by the Committee to Defend the President, a political action committee devoted to re-electing Mr Trump.

The group is run by a former Republican state legislator from Colorado, Ted Harvey.

“That’s the point President Obama made in his book, and we have every right to use his own words – in his own voice – in the political forum,” he added.

Mr Obama was himself criticised in the 2012 presidential election after his supporters ran a misleading attack ad against his Republican opponent, Mitt Romney.

The clip said Missouri steel-worker Joe Soptic’s wife had died of cancer after he lost his health insurance when his factory was shut by Bain Capital, a private equity firm that Mr Romney had managed.

The ad failed to mention Mr Romney was not working at Bain when the factory closed and that Mr Soptic’s wife had health insurance through her own job and was diagnosed with cancer five years after her husband was laid off.

Several ads released only this year have provoked widespread cries of disinformation, a sensitive issue in the US after alleged Russian efforts to sow political division online in the lead-up to the 2016 White House vote won by Mr Trump.

Twitter and Facebook this month refused House of Representatives Speaker Nancy Pelosi’s request to take down a Trump attack ad that was edited to show her repeatedly tearing up his State of the Union address to Congress.

Democratic presidential candidate Michael Bloomberg was also criticised for an attack ad that doctored TV debate footage to show his rivals speechless after he asked if any of them had ever started a business.

And the race-baiting campaign clip distributed by George HW Bush’s supporters about a black convict, Willie Horton, is one of the most infamous attack ads of all time.

Reps probe illegal extortion of truck drivers by Police, others at Apapa port