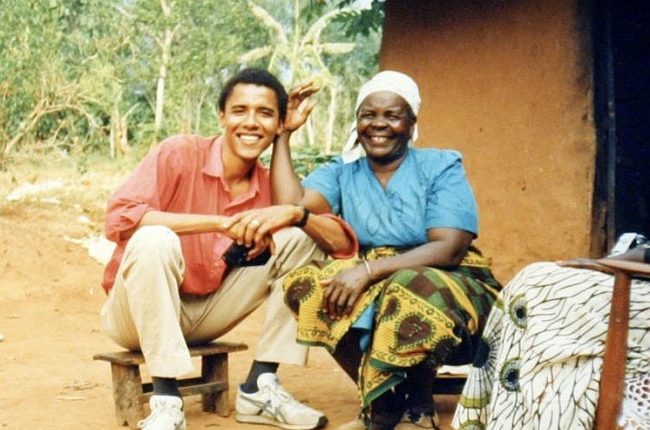 Mama Sarah was said to have died around 4 a.m. local time while being treated at the Jaramogi Oginga Odinga Teaching and Referral hospital in Kisumu, Kenya.

Obama in a Facebook post said late Mama Sarah was born in the first quarter of the last century, in Nyanza Province, on the shores of Lake Victoria.

While noting that Mama Sarah is not his father’s biological mother, he said she raised his father as her own, adding that her teachings helped him defy the odds and do well enough in school to get a scholarship to attend an American university.

“My family and I are mourning the loss of our beloved grandmother, Sarah Ogwel Onyango Obama, affectionately known to many as “Mama Sarah” but known to us as ‘Dani’ or Granny,” Obama said in the Facebook post.

He added that Sarah Obama had “no formal schooling, and in the ways of her tribe, she was married off to a much older man while only a teen. She would spend the rest of her life in the tiny village of Alego, in a small home built of mud-and thatch brick and without electricity or indoor plumbing. There she raised eight children, tended to her goats and chickens, grew an assortment of crops, and took what the family didn’t use to sell at the local open-air market.

“When our family had difficulties, her homestead was a refuge for her children and grandchildren, and her presence was a constant, stabilizing force. When I first travelled to Kenya to learn more about my heritage and father, who had passed away by then, it was Granny who served as a bridge to the past, and it was her stories that helped fill a void in my heart.

“During the course of her life, Granny would witness epochal changes taking place around the globe: world war, liberation movements, moon landings, and the advent of the computer age. She would live to fly on jets, receive visitors from around the world, and see one of her grandsons get elected to the United States presidency.

“And yet her essential spirit—strong, proud, hard-working, unimpressed with conventional marks of status and full of common sense and good humour—never changed.

“We will miss her dearly, but celebrate with gratitude her long and remarkable life.”

Students, youth on rampage as truck kills four in Ibadan

If Nigeria breaks up, visas will be needed to move around, says Osinbajo

BREAKING: Derek Chauvin found guilty of murder and manslaughter in the death of…