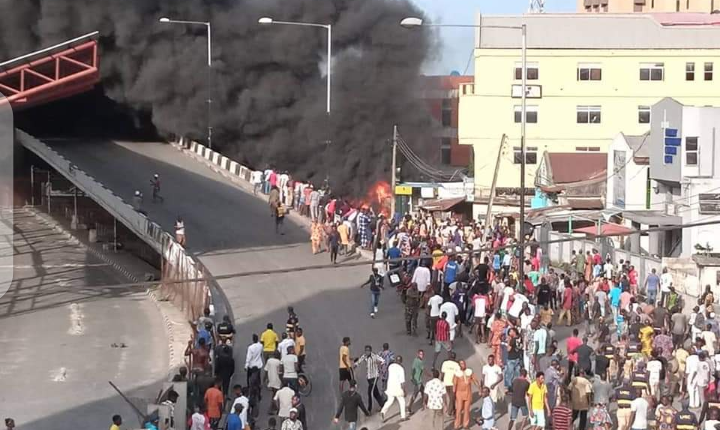 The Federal Controller of Works in Lagos State, Mr Kayode Popoola, on Thursday said Obalende Bridge linking Dodan Baracks in Lagos had been shut to pave way for rehabilitation.

Popoola told the News Agency of Nigeria (NAN) on phone that the road was seriously damaged by a petroleum tanker fire.

” We shut it to advert danger,” he said.

The controller said the bridge deck was badly damaged by the inferno that raged for over five hours which affected structural integrity of the bridge.

“Obalende Bridge got burnt last week Friday and we have shut it to prevent calamity. It was burnt by a tanker going to supply petroleum product to a filling station around that area, it spilled all its content on the road and caused a huge fire.

“It was a terrible accident and the impact to the bridge was much, the fire razed for several hours, the concrete was badly damaged.

“We have shut the bridge to carry out integrity test on it before we can know the extent of damage,” he told NAN.

He said that ministry officials as well as contractors had resumed work after the COVID-19 lockdown which made some companies suspend construction works.

Popoola said that Julius Berger would resume work on the Lagos-Ibadan Expressway rehabilitation and reconstruction project on Monday while contractors on various sites that suspended operations had resumed work.

He said that Hitech resumed construction works on the Apapa-Oshodi-Ojota-Oworonsoki Expressway after closing down for about three weeks.

“Julius Berger will start work on Lagos-Ibadan highway on Monday. The contractors on the Lagos-Badagry highway too are getting ready to start work.

“Hitech has returned to site and has been working on the Apapa-Oshodi-Ojota-Oworonsoki Expressway project,” he said

The controller said that measures were in place to ensure workmen at various sections on construction sites met COIVD-19 guidlines on social distancing.

“We ensure it does not exceed stipulated number of workers on site to ensure adhering to social distance,” he said