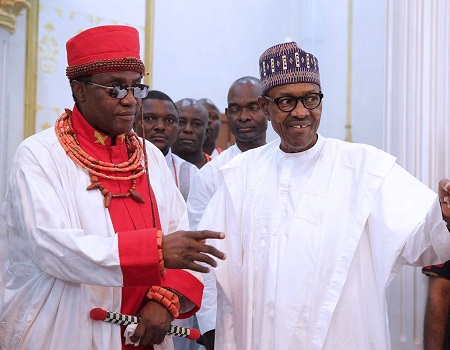 The Oba of Benin, Omo N’Oba Ewuare II has disowned a video currently trending on social media by one Eranomigho Edegbe which hurled invectives and insults on President Muhammadu Buhari just as he reiterated his deep love for the former chairman of the All Progressives Congress (APC), Comrade Adams Oshiomhole.

In a statement in Benin City on Tuesday by Mr Frank Irabor, the Secretary of Benin Traditional Council (BTC), the Oba vehemently denied authorising the video by Edegbe, insisting that the said video and the contents therein were neither commissioned nor was it encouraged by the monarch.

Irabor said that the revered royal father condemned in the strongest terms the malicious attacks on the integrity of President Buhari and all other persons whom the video seeks to malign.

The scribe said: “We wish to state unequivocally that our love for Mr President is unparalleled as the relationship shared dates back to the days of His Royal Majesty, Oba Erediauwa (of blessed memory), the immediate past Oba of Benin. This relationship was further strengthened when Mr President headed the President Trust Fund (PTF).”

The Omo N’Oba stated that Oshiomhole has always respected not just the traditional institutions in Edo State, but also the palace of the Oba of Benin, adding that his affection by Oba Erediauwa who adopted the immediate past chairman as a son is well known and was reinforced during his tenure as governor of Edo State.

He said: “We were happy to convene a send forth for him upon the expiration of his two terms, where his Royal Majesty used the ada (traditional sword) of the ancestors to pray for his protection, a thing quite rare in Benin custom. We are glad that the prayers said on him continue to be efficacious in all his endeavours.”

The monarch also tackled Eranomigho over his utterances against a businessman, Captain Hosa Okunbor, noting that he is an illustrious son of the palace of the Oba who at all times has worked in support of the monarch.

The statement added: “These utterances and behaviour of Eranomigho and his cohorts show that they are not happy and comfortable with the cordial relationship between the Palace of the Oba of Benin and the Presidency.

“Furthermore, it shows that some disgruntled elements like Eranomigho have deep animosity against Comrade Adams Oshiomhole and Captain Hosa Okunbor.”