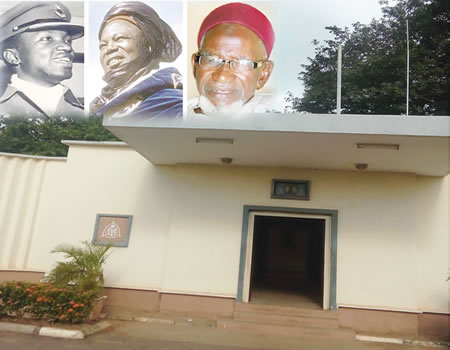 Some days before the first coup in the country took place, even the Sardauna of Sokoto and then Premier of the Northern Region, Alhaji Ahmadu Bello could sense that something was amiss but did not know exactly what it was. MUHAMMAD SABIU writes on the events leading up to the January 1966 coup and the character of the main protagonist.

IT has been 51 years since the most reverred political icon and Premier of the Northern Region, Sir Ahmadu Bello, Sardauna of Sokoto was lost his life during the first coup ever experienced by the nation on January 15, 1966. The late premier was not the only victim of the coup. The then  prime minister, Alhaji Abubakar Tafawa Balewa; then Premier of the Western Region, Chief Samuel Ladoke Akintola and then Minister of Finance, Chief Festus Okotie-Eboh among others also lsot their lives.

The military were also not spared as top military brass of Northern extraction like Brigadier Zakari Maimalari, Brigadier Kur Mohammed, Lt Col. Abogo Largema, Lt Col Yakubu Pam, including others from the South were killed in the pogrom that was conceived and planned by some young military officers. The officers were Majors Ademoyega, Emmanuel Ifeajuna, Anuforo, Timothy Onwunatuegwu, Chukwuka, Don Okafor, Obienu and the arrowhead, Nzeogwu who led the Kaduna operations.

Though of Igbo origin, Nzeogwu was born in Kaduna and knew the terrain well. He reportedly led troops to Sardauna’s residence at Rabah Road where the late premier was killed.

In justifying his action, Nzeogwu had blamed the political class for massive corruption, (which is still prevalent today) accusing them of collecting 10 percent kick-backs on contracts, even as the economy faced a bleak future.

Going down memory lane, Justice Mamman Nasir, former President of the Court of Appeal in an interview with Sunday Tribune said Nzeogwu›s claims were not true. He said if there was corruption during Sardauna›s era, “we could not have recorded so much achievement under the late premier. The late premier’s main concern was service to the people.”

Speaking further, the eminent jurist, said Nzeogwu’s claims were not only outrageous but utterly false and an attempt to paint the political class of that era in bad light thereby distorting history.

After, the failed coup when he was confronted by a journalist, Denis Ejindu of the Africa and the World Magazine on the possibility of war breaking out in the country, the coup leader, Nzeogwu, categorically dismissed such notion, saying “the North was not ready for war, Lagos too was not  ready for war.” He however, reportedly maintained that the East was not only ready but prepared to crush any opposition.

Nzeogwu clearly misunderstood the mood of the nation at that time because barely few months after the said interview,  the civil war broke out and an estimated 3million people reportedly lost their lives in the ensuing pogrom.

Recalling the events surrounding the coup and the war that followed, the chief driver of the late Sardauna, Ali Sarkin Mota, spoke of the major protagonist of the January 1966 attempt to change the government of the country.  Now in his late 80›s, he told the Sunday Tribune that Nzeogwu was one of the few military officers who had access to the late Premier’s official residence.  According to Sarkin Mota, the reason might not be far from the fact that Nzeogwu spoke Hausa fluently.

‘So, when we heard that he led the coup in Kaduna, we were shocked. I have the firm believe that if the premier was alive to tell the story he might not be surprised. I›m saying this because the premier might have sensed that Kaduna was up to something funny,” he stressed.

Continuing, he said: “Before they struck, Nzeogwu was trailing our movements. Everywhere the premier went he was following us.  For instance, on the eve of the coup he came to the State House. He was also at the airport when the premier went to receive Chief Samuel Akintola.

“Sardauna also told his visitor about Nzeogwu’s curious movements and Akintola asked the premier to summon him. The premier told Akintola that it was not necessary.

“On the day they struck, he (Nzeogwu) stormed the house around 2 am. Nobody expected any foul play. Unknown to us, he led the troops that demobilised the policemen guarding the premier›s residence. Thereafter, around 4 am, he went to the wives’ quarters to ask for Sardauna›s whereabouts.

“I could vividly recall he was shouting ‘where is the premier’… After searching for a while and he could not see him, the late premier finally showed himself up and he pumped some bullets on his body.

“In the morning, we went to search for the premier. We discovered his body in a pool of his blood at the back of his house. The region had lost a colossus that until now that I’m talking to you, nobody has been able to step into his shoes.”

Sunday Tribune also spoke with Captain Abdullahi Maikano Sara (retd), who was Nzeogwu›s neighbour at Kanta Road, Kaduna. Maikano whose father was also in the military was one of the privileged Nigerians who knew Nzeogwu closely and was even with him on the eve of the coup. According to him, Nzeogwu never showed any sign that he was up-to something.

“Nzeogwu was living at Number 13 Kanta Road, just before the Civil Service Commission building, and our house was facing his own. One thing I would remember about him was that he was always helping me in my class work, especially Arithmetic. After helping me to do my class work, he would give me his own assignment.

“Again, he was somebody who liked skin cut and bounced while walking. One amazing thing about him was that he was always with his sunglasses, but he hardly put them on. Rather he chewed on them. Also, he liked Hausa attires. There was this sky blue Hausa gown he loved wearing all the time,” Capt. Sara recalled..

According to the retired officer, on the day of the coup, “my father asked me to go and buy bread for my younger ones. You know it was during fasting and I was fasting. And when I was coming back on my bicycle, I saw Nzeogwu coming on high speed. He stepped on the brakes of his car as if he was going to stop but in a second he changed his mind and waved at me. While waving, I noticed a white bandage on his hands. So, I waved back. That was the last time I saw him.

“On getting home, I heard my mother crying, saying they had killed the premier. The North was finished. I asked, my father who killed the premier and he said ‘your friend.’ I asked him ‘which of my friends’ because I knew most of our leaders: IBB, Obasanjo, Abacha etc they were all living at Kanta Road, and he told me ‘Nzeogwu.’”

Capt. Sara at that point remembered the bandaged hand he saw minutes back and began to understand the probable reason for it. He told the Sunday Tribune that his impression about the coup was that it was an ethnic-inspired attempt to overthrow the government.

“Out of the 28 officers or so that were arrested, 21 of them belong to a section of the country or tribe. Then you looked at those who were killed they were either Northerners or from the South West.

“I want to put it on record that the coup sowed the seed of these agitations we are seeing today from left, right and centre. Don›t forget there was healthy rivalry among the regions before the coup. But immediately General Aguiyi Ironsi took over and suspended the constitution, he introduced the unitary system of government. That was the beginning of our present predicament as a nation,” he averred.

It might have been more than five decades since those events took place, but the memories still remain. To immortalize the late Sardauna at least two major monuments stand in his memory. There is the Ahmadu Bello University and the Ahmabu Bello stadium among other major roads across the country. There is hardly anything to remember those young officers. Perhaps “the evil that men do live after them.”