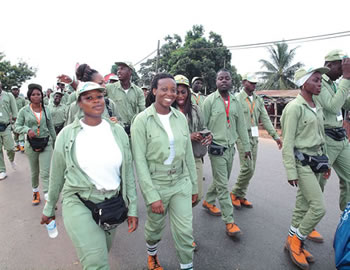 The National Youth Service Corps (NYSC) has entered into Memorandum of Understanding with Bank of Industry, Central Bank of Nigeria and other financial institutions to give soft loans to corps members to establish their dream business after their service year.

Governor Willie Obiano stated this today at the NYSC Orientation camp Umunya in Oyi council area during the closing ceremony of orientation course for the 2017 Batch B Stream One corps members deployed to Anambra state.

He noted that the corps members being deployed to various local government areas in the state, have been well-equipped to face the challenges of life and contribute meaningfully to the development of their host communities.

Represented by the Commissioner for Youth Entrepreneurship and Sports Development, Dr (Barr) Mrs Uju Nworgu, Governor Obiano, however, assured them of the conducive atmosphere within the period of the service while the state would also recognise corps members with an outstanding performance during their service.

The governor pointed out that the NYSC scheme inculcated the virtues of teamwork, patriotism and national integration in them and stressed the need for them to use it in the places of primary assignments to better their lots.

Earlier, the NYSC State Coordinator, Mr Ebenezar Olusegun Olawale, charged them to be vanguards of positive change, good ambassadors of the NYSC scheme and shining examples for others to emulate.

He encouraged them to exhibit a high sense of responsibility, resilience and perseverance throughout the duration of their service year as the state and NYSC Directorate Headquarters would visit their PPAs at intervals to ascertain levels of integration in their host communities.

Speaking to Tribune Newspaper, some of the corps members, Mohammed Ahmed Abdulrauf from Niger state and Elizabeth Ogundun from Kwara State expressed satisfaction with the hospitality given them in the camp, saying it has erased the bad perception they had about the Igbos.

They promised to use what they have learnt in school and camp to serve their host communities better.