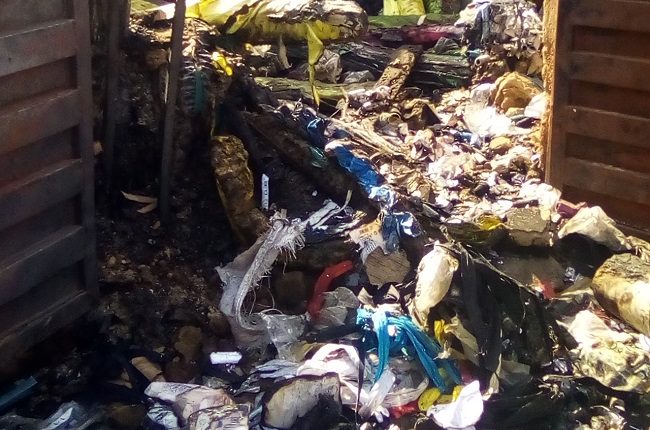 Traders at the Popular Nyanya market on Abuja-Keffi expressway in the Federal Capital Territory (FCT) Abuja, who lost goods to the fire incident that razed down the market on Tuesday night are counting their losses and begging the government to come to their aid.

When Tribune Online visited the market on Wednesday, the traders were lamenting and in a very sorry state.

Mrs Magaret Okudili who duels in food and beverages said “We have lost everything, the government should please assist us, even individuals too can help us.”

Mrs Lucy Ogonna, a fashion designer told Tribune Online that “I have lost people’s clothes and all my machines, we want the government to help us.”

The Chairman of Nyanya Market Traders Association, Comrade Ahmed Shehu, said that “We are suspecting electricity to be the cause of the fire because immediately they brought backlight we noticed the fire.

“People have lost goods worth over 100 million, the shops affected are ten in number but some are divided into two, so thirteen people are affected.

“Please use your media houses to tell our sad story so that government can come to our aid, for now, we have not seen anybody from the government, and most of the traders are widows, some are retired people that sank all their pension into business and now the fire finished it all,” he stated.

Verdict: The claim is false. The content of the article published by these online platforms is not new; it has been recirculated several times and has been debunked.Nyanya market Inferno: Victims seek government’s support