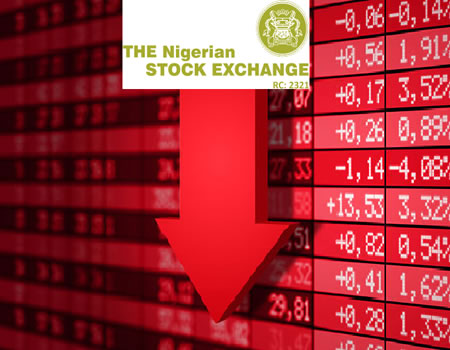 THE Nigerian equities market on Wednesday dropped further by 0.48 per cent on a sustained bearish run for the third consecutive trading session.

Similarly, the market capitalisation shed N51 billion to close at N10.627 trillion, in contrast with the N10.678 trillion posted on Tuesday.

The downturn was impacted by losses recorded in medium and large capitalised stocks, amongst which are: Forte Oil, Cement Company of Nigeria (CCNN), Dangote Flour Mills, Dangote Cement and Union Bank of Nigeria (UBN).

Analysts at APT Securities and Funds Limited expected “Further moderation of the ASI as foreign investors remain on the sidelines in the absence of major economic triggers. However, this was to be diluted by value investors positioning for the long term.”

ALSO READ: How FCMB is driving value through diversified strategic investments and operation

Meanwhile, analysts at Afrinvest Limited anticipated a possible rebound before the close of the week, as investors look out for fundamental stocks with attractive entry prices.

Market breadth was negative with 11 gainers, compared with 17 losers, with Chams recording the highest price gain of 9.09 per cent, to close at 36k per share.

Conversely, Wapic Insurance led the losers’ chart by 10 per cent, to close at 36k per share.

Similarly, the volume of shares traded closed lower with an exchange of 176.74 million shares valued at N2.08 billion traded in 3,294 deals.