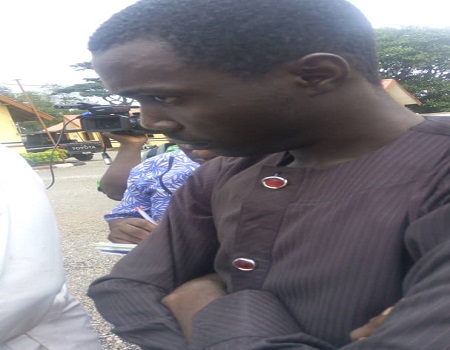 A pastor, Prophet James Abiodun Adeniyi, has been arrested by the men of the Nigeria Security and Civil Defence Corps (NSCDC) Ondo State command, over his alleged involvement in a financial scam of N1.7m.

The suspect who is the founder and officiating pastor of the Christ Apostolic Church, Freedom City International, located at No 7, Gbogi street, Akure was arrested after series of complaints from members of the public who had fell victim.

Parading Adeniyi in Akure, Ondo State capital, on Thursday, the NSCDC Sector Commandant, Mr. Awili Pedro, said the clergy was arrested after complaints from some members of the church who had duped.

According to Awili, the suspect allegedly defrauded an unsuspecting member of his church of N1.7m by deceiving her to procure passport and visa for her son.

He also said the Pastor allegedly duped some unsuspecting unemployed youths in his church, by paying money to him, promising them jobs, saying the youths numbering ten, paid between N400,000 and N.5m into the pastor’s account without being employed.

The NSCDC commander, however, said the trouble started for the suspect when one of the suspects demanded the refund of her money and the Pastor failed to pay back and claiming not to involve in the deal.

According to him, the Pastor introduced his accomplice, Olamilekan Omole, to the church who connived with the pastor to defraud the unsuspecting victims.

He said the pastor had been dragged to court by the church youth who were scammed by Adeniyi, demanding the refund of the money if he could not fulfil his promise.

Speaking, one of the victim, Mrs. Folashade Olukini, explained that she paid the sum of N1.7m for the procurement of America visa for his son but the pastor and his agent failed to procure the visa.

She explained that the agent had been on the run and refused to pick his calls for the past two months and had to hold the clergy responsible, saying “our pastor guaranteed that the agent was his Personal Assistant.”

Olukini said ” I started attending his church this year while he introduced his Personal Assistant as a travelling agent who can help to procure America visa and I approached them for my son’s visa.

“The pastor advised me not to pay until there is a directive from God. He called me in February to go on with the arrangement and I paid for the procurement of the visa by transferring the money into Olamilekan account twice, while they assured me the visa will be ready before the end of April.

“After transferring the money to the Personal Assistant, he no longer picks my calls and disappeared and his number seized to be going through. I approached the pastor but said he knew nothing about it.

“He promised to get across to the agent but there was no news until now and I demanded the refund of the money while the pastor claimed to be unaware of what transpires between me and the agent.”

Another member of the church, Solomon Dauda, said he had also dragged the pastor to Court for defrauding him and his family over a visa issue.

However, the suspect, Adeniyi, did not deny the allegations and expressed his readiness to refund the money.

According to him, he introduced the victim to Omole but said the agent had taken to his heel and could not find him but promised to pay back the money if released from the custody of the NSCDC.

The NSCDC commandant, however, said the suspect would be handed to the police while he would be charged to court.