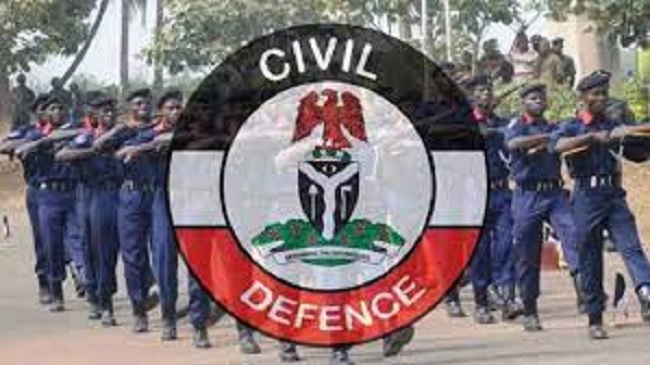 In a bid to address the housing need of officers and men, of the Nigeria Security and Civil Defence Corps (NSCDC), the Commandant General, Ahmed Abubakar Audi, performed a groundbreaking ceremony for 550 housing schemes in Sokoto State for its officers and men.

The mass housing project, which spanned 31.070 Hectares of land at Milgoma Community in Bodinga LGA opposite the runway of the Sultan Abubakar III International Airport Sokoto will contain 550 units of befitting accommodation to ameliorate the housing challenge being faced by officers and men of the Sokoto State Command.

Represented by the Deputy Commandant General, Administration, Zakari Ibrahim Ningi, fdc, he restated his commitment towards improving the welfare of personnel, which housing forms part of it.

He further stated that a well-motivated staff is usually an asset to any organisation and the Corps management under his leadership will continue to upscale staff welfare through various life-changing projects as motivation for efficient service delivery at all times.

“What we are witnessing today is in furtherance of my vision to prioritize the welfare of officers and men of the Corps.

“It also forms part of my vision to address the housing deficit in the Corps by making house ownership more accessible and affordable to personnel of the Corps with an easy and convenient payment plan.

“The Corps’ leadership and administration under my watch have put in place integrated development plans and programmes towards addressing the housing needs of staff across the board.

“Let me, therefore, assure you that this is a phased project which will be replicated in all state commands and the Federal Capital Territory in our deliberate attempt to further enhance productivity and operational efficiency.

“In an attempt to bring this vision to fruition, the Corps has engaged Messrs. Tunkey Projects Limited, a reputable developer and project consultant for the construction of 550 Housing Units to ameliorate the housing challenge being faced by officers and men of the Sokoto State Command,” he explained.

He expressed optimism that when completed, the project will be an additional boost to the morale of staff to deliver on the Corps’ mandate.

Audi appreciated the uncommon kind gesture of His Excellency, Rt. Hon. Aminu Waziri Tambuwal, CFR (Matawallen Sokoto), Executive Governor, for his magnanimity and express approval was given for the allocation of hectares of land at Milgoma Community, in Bodinga L.G.A including waiver of the payment of compensation on the land.

He eulogised the Governor for being physically present at the event to perform the groundbreaking ceremony.

“These gesture goes further to prove His Excellency’s commitment and determination towards enhancement of peace and security in Sokoto State, by constantly supporting activities and operations of Security Agencies, particularly the Nigeria Security and Civil Defence Corps in the State.

“Let me use this opportunity to express my sincere gratitude to His Excellency for his magnanimity as well as his continued support and assistance to the growth, development and operational efficiency of the Corps in the State

“Let me assure your Excellency that the Corps will continue to support the lofty programmes and efforts by your Government to keep Sokoto State safe and secure.

“Permit me to use this medium to reiterate the Corps’ commitment to the enhancement of peace and security to engender socio-economic development of our dear Country.

“To this end, the Corps has continued to ensure effective synergy with the Military, Police and other Sister Agencies to bring to an end, the spate of insecurity occasioned, by the nefarious activities of terrorists, bandits, kidnappers, insurgents, farmers/herders clashes, ethno-religious crises.

“We remain steadfast in our collective resolve to address the prevailing security situation in the country,” he assured.