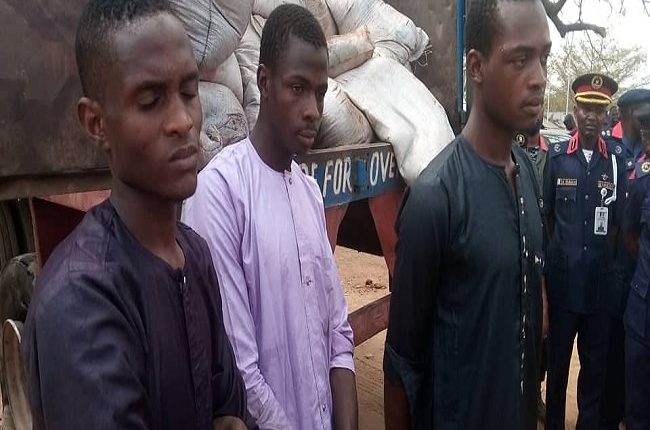 The state commander of the NSCDC, Mr. Peter Maigari, while parading the three suspects at the command headquarters on Monday in Lokoja said it took the eagle eyes of his men to make the seizure around 5 pm on March 4, 2021

He noted that the criminals had become sophisticated in the method they employ to carry out their nefarious activities in order to evade being arrested by security agencies.

He added that it took the prying eyes of officers and men of the anti-vandal unit to beat their antics as the consignment which supposed to be transported by tankers were neatly wrapped in polythene bags and covered on the surface with bags of saw dust.

He said three suspects have been arrested in connection with the seizures while the alleged escort escaped, vowing to ensure that all those behind the act would be arrested and brought to book.

The driver of the trailer, Mustapha Muhammed, 25 and a native of Potiskum in Yobe State while speaking with Tribune Online said he was not aware of the content of the consignment, adding that he was only called to load it from Port-Harcourt and to deliver it at Sulejah in Niger State.

He denied knowing the owner of the consignment but said the escort who ran away was the one who contacted him for the job and said he was not aware of the implications of transporting petroleum products through trailers.

CAN slam FG over Abuja-Lokoja road