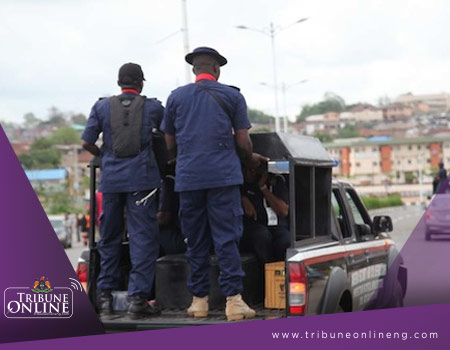 A Magistrate court personnel in Birninkudu magistrate court in Jigawa state, Yusif Adamu had been arrested for by the Nigerian Security and Civil Defense Corps (NSCDC) defiled a 13-year-old orphan name withheld Zango quarters.
‎
Parading the suspect Yusuf Adamu alongside the victim‎, a 13 year old boy at the Nigeria Security and Civil Defence Corp (NSCD) Command headquarters yesterday in Dutse, the Commandant Muhammed Durmin Iya said the Yusuf Adamu is 43 years old of Zango in Birninkudu town, the headquarters of Birninkudu local government area in the state.

According to the commandant that the man was arrested near the Magistrate court Birninkudu trying to lure the boy with an intention of having the carnal knowledge with him for the fourth times.

‎
‎However, the suspect Yusuf Adamu is married and a father of nine children, five Males and four females. Although he has refused to admit whether he has a similar act with other people or young boys apart from the present victim, he said no, but NSCD personnel said the investigation is ongoing to unable any cover around the situation.‎

In his‎ confession during the interrogation by the NSCD personnel, Yusuf Adamu admitted that he was the one who introduced the young boy into the act where he had such ugly act with the boy for more than four times in different places.
‎
The suspect said he is a staff at the magistrate court Birninkudu and he is using the premises of the court on the night and weekend days and carried out the immoral acts.

Also, the 13-year boy name withheld has narrated his own part of the story‎, saying \’he has been given me N100,00 only three times to have the act with me. And the fourth one in which we were arrested, he gave me N200,00.
‎
Durumin Iya warned people and guardians generally to always take good care of their children and young ones against bad eggs among in the society.

Adeyemi students in violent protest over the killing of a colleague

Buhari’s visit to Taraba, Benue, others is afterthought, vote-seeking ―Fayose