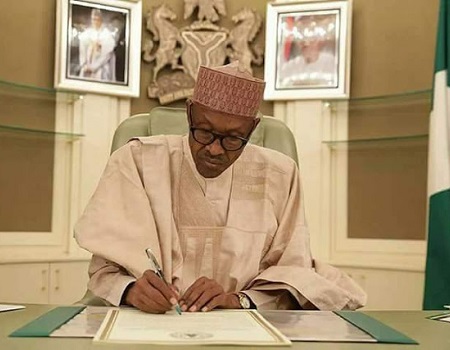 THE presidency has assured that President Muhammadu Buhari will not sign any bill into law where it compromises the provisions of the constitution.

A statement issued by Senior Special Assistant to the President on media and publicity, Garba Shehu, in Abuja, distanced the president from the bill, noting that it was a private member bill.

The presidency however requested individuals opposed to it to follow due process in thief opposition.

The statement read: “Nigerian groups or individuals that have objections to the Nigerian Press Council Amendment Bill have been told to follow due process rather than throw mud at the government using the media.”

The statement pointed out that “all the attacks against the government as a result of the bill were misdirected since it has nothing at all to do with the Executive.”

“This is a privately-sponsored bill. President Muhammadu Buhari is not involved.”

He added that there is a process to be followed when people oppose a bill that is being considered by the Legislature and encouraged anyone against the proposed bill to do so.

“President Buhari should not be blamed for the actions of the legislators whom we voted to represent us in the National Assembly.

“At the same time, the Presidency would like to assure everyone that, however, the process ends, President Buhari will not compromise his impeccable and untainted democratic credentials by signing into law, any bill that violates the letter or the spirit of the Constitution of the Federal Republic of Nigeria,” Shehu said.