NOUN gets N90m grant for research from TETFund 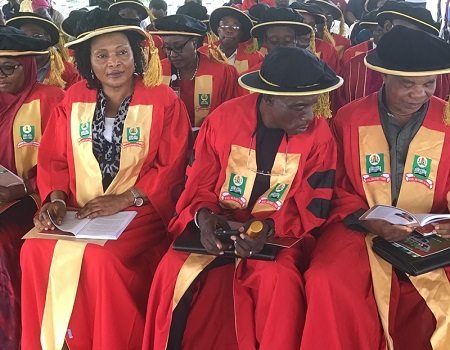 The National Open University of Nigeria (NOUN) has secured a grant of N90 million from Tertiary Education Trust Fund (TETFund) for research work in the institution.

The Vice-Chancellor of the university, Prof. Abdalla Adamu who disclosed this at the 14th inaugural lecture of NOUN in Abuja, noted that part of the grant would be used to set up a language research centre.

Adamu said it was necessary to establish the research centre to assist the society in acquiring the theories of language as it concerns communication disorder.

“I want us to establish a research centre for this in the Faculty of Arts; this is because we have about N90 million for institution-based research from TETFund, so money is not a problem.

“And if a centre like this is established, it will reach all the communities in the country because we are the only university that has a presence everywhere.

“So, my plea is that the Dean of Faculty of Arts should consider the possibility of establishing a multi-disciplinary research centre because it involves education, language, child development, psychology, biology and other things,” Adamu said.

According to him, the Inaugural Lecture delivered by Prof. Shirley Ono Yul-Ifode is an eye-opener to factors and stages necessary in the normal language development of the child.

He described NOUN as the best university in the Galaxy and as such would ensure that the institution got the best of infrastructure and lectures for the benefit of the students.

Yul-Ifode had in her lecture which was derived from “birth cry” noted that language played a major role in our daily activities and as such attention must be given to the brain from birth for it to develop well.

She said that the development of a child and learning could be affected if anything goes wrong with any part of his or her mechanism.

“For example, a child whose motor system has sustained damage to the degree that he cannot move his tongue or lips with ease or without pain cannot attain spoken language behaviours that sound normal for his age.

“That may be why in core linguistics, we do not study speech without a clear understanding of the basic organs of speech.

Okowa commended on choice of appointees