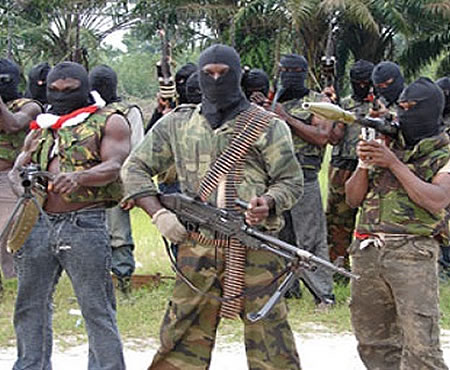 A notorious militant group who have been terrorising communities along the coastal area of Lagos, Ogun and Ondo states in the early hour of Monday, killed a military officer attached to the security outfit on the coastal line,  Operation Delta Safe, (ODS) in Ajakpa, in Ese Odo local government area of Ondo state, while three others were hit with bullets.

However, the leader of the militant group, Ossy Ibori, was also killed by the military, while some members of his group escaped with gunshot during the gun duel which lasted several hours with the men of the Operation Delta Safe.

It was gathered that the military operatives who have been parading the waterways to flush out criminals and provide adequate security in the state,  stormed the hideout of the militants in Ajakpa, and killed the leader of the group in the process.

According to a source, the militants immediately opened fire on the military to retaliate the killing of their leader, killing a member of the security outfit in the process.

He explained that other member of the group however took to their heels and jumped into the river saying many of them escaped with gunshot.

Speaking on the development, the Coordinator, Joint Media Campaign Center, of the ODS, Abubakar Abdullahi, confirmed the death of a member of the military outfit, disclosing that three other soldiers who sustained injuries were receiving treatment at an undisclosed hospital

According to him, “troops of Operation DELTA SAFE in line with its mandate to rid Niger Delta of all criminal acts of militancy and kidnappings in a special operation repelled an attack on troop’s location around Ajakpa community in the creeks of Southern Ondo State last night.

“The attack was led by one notorious gang leader, Ossy Ibori with a hideout at Ajakpa, Ese-Odo Local Government Area of Ondo State.

“The leader was gunned down during the gun duel, along with some of his his gang members and his body was identified by some of the locals in the area.”

Abdullahi however said his men were after other member of the militant group who jumped into the water with a pledge to arrest them and bring them to book.

He stated that one AK-47 Rifle and 4 Magazines were recovered from the men who have been tormenting the people of the coastal communities.

He disclosed that the criminals have been terrorising parts of Lagos, Ogun and Ondo states for a long time and the need to put an end to their operation led to the death of the leader of the group, Ibori.

Speaking on the atrocities of the militant group, he said “they committed many atrocities threatening the peace and security of the general areas. Last month, the gang kill an army captain and two Policemen at Ikorodu.

“Also late last year, they abducted students and staff of a secondary school. The criminals in addition, carried out several attacks in Ese-Odo community around Ajakpa, Safarogbo and Bolowo areas.

“The need to flush them out from their hideout became necessary to ensure peace and security in Ondo state but sadly, one gallant soldier paid the supreme price while three others sustained gunshot wounds.”

He however appealed to the residents of the coastal communities to remain calm and support the security outfit in giving useful information on the where about of the other criminals.