Nothing to show we are hosting mineral resources, Ekiti traditional ruler laments 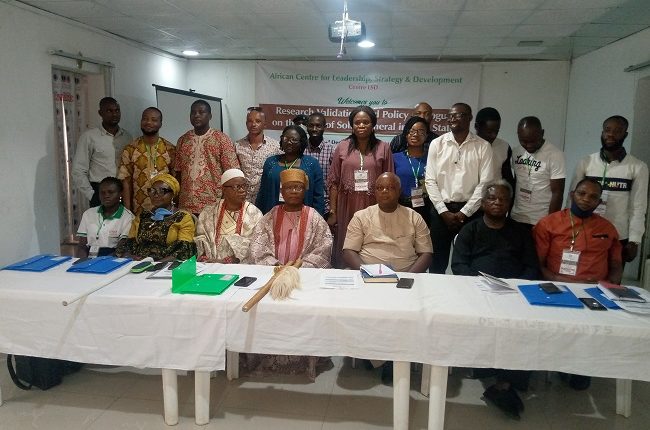 The Ajero of Ijero-Ekiti, Oba Joseph Adebayo has lamented the alleged abandonment of his community by the government at all levels and other stakeholders in the mining sector despite hosting large quantity of mineral resources.

The monarch said the resources were being extracted from the community by miners and government but regretted that nothing to show for it in terms of meaningful developmental projects that could help in transforming the community’s social-economic life.

Oba Adebayo spoke at a summit organised by African Centre for Leadership, Strategy and Development (Centre LSD) and supported by Open society Initiative for West Africa (OSIWA) for stakeholders in the mining value chain.

Going down memory lane, the monarch said, “I came to the throne in December 1991 and by January 1992 mining activities were in full-blown and I can say everything has been going on smoothly and I pray it continues, but the community has nothing to show for all these mining, even from the federal government, state or directly from the miners.

“We still don’t have much to show for the past 28 years, the mines have been taken away, nothing left, no industry, there should be an industry in Ijero, we called for assistance in that line.”

The Executive Director of Centre LSD, Mr Monday Osasah, stated that the summit became necessary due to the determination and commitment of the President Muhammadu Buhari-led administration in transforming the mineral sector for economic prosperity for the country.

Osasah stated that the first phase of the project of meeting stakeholders and conducting research took place in three states namely, Ekiti, Taraba and Ebonyi states in 2018.

“The success recorded in the 3 states made OSIWA ask us to go back for the continuation which we are currently doing, sequel to the determination of the Buhari led administration to reform the mineral sector. This programme was conceptualized to engage citizens in the part of the reformation,” he said.

Osasah disclosed that profound research had been carried out at the 1st phase of the programme in 2018, explaining that lack of adequate data and infrastructural facilities have been identified as a constraint to the effective exploration of mineral resources crucial to the nation’s economic transformation.

According to him, “At this second phase, we felt we should go again for more research for a deeper solution to enable the government to detect a revenue centre, we discover there are issues of lack of data, infrastructural function on mineral resources.

“We need to engage the ministry of solid minerals to do the needful and make the documented research a point of reference for future consultation.”

While urging miners in Ekiti to intensify efforts in corporate social responsibility, Osasah added that the engagement will proffer sustainable mining in the State.

The State Commissioner for Environment, Mrs Iyabo Okeimien, that the citizen engagement program would move the sector forward for meaningful collaboration, adding that it provides direct and indirect opportunities to make mining vibrant.

Other stakeholders who spoke during the summit noted that it’s imperative for civil society organisations and citizens, in general, to follow up any pronouncement made by the government on development strategy.