We should not bring politics into education —Kaduna SUBEB boss 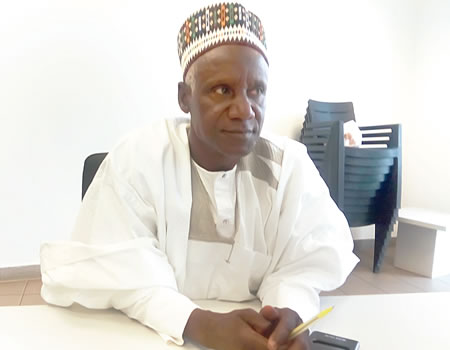 Nasir Umar is a trained teacher and former principal of the famous Barewa College, Zaria. He is the current executive chairman of Kaduna State Universal Basic Education Board (SUBEB). He speaks with MUHAMMAD SABIU on the competency test organised by the state government, the disengagement of the 21,780 primary school teachers and the current strike embarked upon by the teachers in the state. Excerpts:

Why did the state government organise the controversial competency test for the primary school teachers?

When we came on board, we decided to go round the public primary schools and to our chagrin, we discovered that most of the primary schools were in bad shape. But worst, we discovered that the teachers could not properly communicate in English with their pupils especially those in the rural communities. Thus, we proposed for the training of these teachers which the state governor, Mallam Nasir el-Rufai graciously approved. When we trained thousands of them, we still realised that the situation had not improved. Tax-payers money was just being wasted. The improvement that we desired to see in the communication between teachers and the pupils was still hopeless. So, it was based on this that we decided to conduct a competency test for the primary teachers. Thus, 33,000 primary school teachers sat for the exams and out of this figure, 21,780 failed the test. As you are aware, this government is doing everything humanly possible to ensure that there is sanity in public schools. To this end, the list of those who scored 75 percent and above was released. But that does not mean that those who did not see their names should stay at home and refuse to report to duty. We are going to follow due process if we are going to relieve anybody of his job as contained in the civil service rules and regulations. So, we are expecting our teachers especially those involved to be reporting to their respective schools.

In a nutshell, who are the people affected?

What we are doing now is we are working tirelessly on processing the letters of those affected. Those who were affected are those teachers who scored less than 75 percent. And according to the civil service rules those who served from one year to five years their own case would be termination, while those who served for than five years their own case would be retirement. So, we are doing everything humanly possible to give them the mandatory three months notice as required by the law. So, what we are doing now is preparing for letters of termination or retirement. So, those involved should go back to continue teaching our children. On our part, we are going to monitor them, we will continue to visit the schools and know what is happening. Our major concerned is the plight of education in the state which we intend to reform for the benefit of our children especially the children of the poor who we feel must have access to qualitative education. We want to see, in the nearest future, that the children of the politicians as well as top civil service are in these public schools.

We also learnt that teachers affected were given the chance to re-apply. How true is this?

Yes, we said those who did not see their names are free to re-apply and as I speak with you, quite a number of those affected have re-applied. To ensure that nobody is unjustly disengaged a committee was set up to look into their cases or complains. Insha Allah, we have looked at the various complaints. We traced their scripts and remarked. That is exactly what we did. We are transparent about the entire process.

Tell us what you are currently doing about those who have re-applied?  When are you going to release the names of the successful candidates?

As at the time the examination was set for the new applicants, we received about 43,000 application forms. So, for those who want to become teachers, the names of the successful ones will soon be released. And after that, we are going to call them for a verbal interview and after the interview for those who are qualified, we will again call them to submit their documents for screening to prove that they have attended the institutions they claim to have attended. After that, we give them a temporary appointment letter. We are going to strictly follow the civil service rules and regulations.

The Nigeria Union of Teachers (NUT), they claim it was not carried along when you decided to organise the competency test that generated this uproar?  Tell us what happened.

Let me tell you the truth, we should not bring politics into education. I was a member of that committee as well as some members of the NUT. That committee was under the SSG and Head of Service. We met and discussed with the active participation of NUT. The only appeal from NUT was that the pass mark should be pegged at 60 percent. I hope you are getting what I am saying. Remember I told you that the union only made an appeal to the committee and it is not the committee that will decide the final score. The onus falls on the person who gave us the assignment to determine that. That is what is happening and that is the truth.

How was the test organised and who participated in the exercise?

The competency test involved all the stakeholders in education including the SSG who was the chairman supported by the Head of Service. Other members included members of the press, members of NUT, members of the Teachers Registration Council of Nigeria, they were all involved in the preparation of the competency test. We adopted other members from the Ministry of Education as well as the Teachers Service Board. We all agreed that the competency test should take place the same day in all the 122 centres across the state. So, we also agreed that only 40 teachers would be in a class. We also said every teacher should sign an attendance register which they did. After the exams, we invited those marking NECO and WAEC to mark the scripts. We agreed that the marking should be a conference marking so that no marker should take any script outside the hall. After that, we still invited other educationists from the state university, Federal College of Education, Zaria and college of education, Kafanchan to do the re-marking. After that, we invited an organisation from the United Kingdom, Teachers Development Programme (TDP) to analyse the results which they did and came out with the percentage. So, the exercise was an open thing. It was not something secret.

There is this argument that only the Teachers Registration Council by law has the right to organise the competency test. What can you say about this?

I want you to know that we have not contravened any law. The teachers are under our employment. We have the right to assess them at any time we so desire and we will continue to do so. We have to test them to know their level of competency and equally to plan for their training and retraining for the betterment of the system. So, nobody can say we itself don’t have that right. If they knew we did not have the right, why did the council involved in the whole process? The state director of the Teachers Council was a member of the committee. It may interest you to know that the screening and vetting of the questions were done by the teachers’ council. It is a sincere commitment to revive the ailing education sector especially the at the primary level.

If NUT was involved in the exercise, why then did it go on strike?

To be definitive, the strike is unlawful and unacceptable. When the school resumed, we took time to visit some of these schools and we directed all the education secretaries in the state to go round and ascertain the resumption of schools and of course the result was positive. Teachers have willingly resumed, but unfortunately, members of NUT were going round these schools to disperse the teachers. This action by the union is simply to distract teaching and learning and their action is not only against the norms of the society but against our laws. Thus, I want to use this medium to inform the union and the erring teachers that refused to report to work to resume immediately without delay or the government will be forced to take action accordingly. From reports reaching my office, we learnt that in some local governments, the union went to the extent of closing offices of education secretaries and their staff. The decision that the education secretaries should report to the local government Sole Administrators was commendable. We were told the Sole Administrators later sent security operatives to protect the government offices as well as the staff. The NUT should stop harassing the teachers. We have directed that attendance register should be opened in all the primary schools. This determination will be used to register those who complied with government directives. Those who fail to report, action will be taken against them.