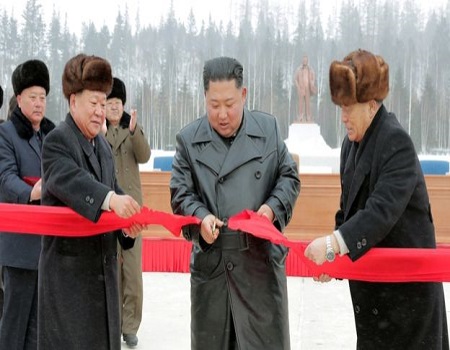 North Korea has officially opened a new town its media is calling the “epitome of modern civilisation”.

Leader Kim Jong-un cut the red ribbon at Samjiyon near Mount Paektu in the north – hailed as one of the country’s most important construction projects.

State media KCNA said the town – which is able to accommodate 4,000 families – boasts new apartments, a ski slope, and a stadium amongst other facilities.

However, forced labour is said to have gone into the construction of Samjiyon.

And the town – even if it lives up to state media billing – will be an outlier in North Korea, where the majority of people live in poor conditions.

According to the non-governmental organisation the National Committee on North Korea, many “suffer from shortages of food, fuel, electricity, running water and other necessities.”

According to Colin Zwirko, a correspondent at specialist site NK News, the town is a “model” of sorts.

“As it appears now, it [has] nice clean facades and unique, ornately designed buildings that would not resemble really any other town in North Korea,” he told the BBC.

“Someone roaming around Samjiyon as a tourist would not stumble into less well-kept areas away from the main road, as is the case in Pyongyang and other cities.”

Mr Zwirko added that the town is “quite small and walkable”, measuring around 2-3km in either direction.

A town already existed before the reconstruction. Some buildings were remodelled, while many more were torn down and replaced with new buildings, according to Mr Zwirko.

State media previously reported that more than 450 new buildings would be constructed, including industrial and recreational facilities.

KCNA said the town had undergone a “drastic change”, describing it as a “utopia town under socialism.”

It is not clear if anyone has moved in, but the town was previously home to some residents – though it is also unclear how many.

It’s not known how much money has gone into the construction of the town.

But construction happened at a time when North Korea is under tough sanctions, and its completion shows how much importance the government placed on the project.

Mr Zwirko said the state “pushed construction regardless of resources, and regardless of lack of access to better building materials due to sanctions.”

There is also evidence, said Mr Zwirko, that forced labour was used to complete the projects.

“We have seen evidence of forced labour in terms of local civilians working on the project,” he said. “State media even boasts of such work, though [they call] them volunteers.”

It is not uncommon for local civilians to be “forced” to work on such projects, and locals are often “required to contribute to construction projects by working and/or providing resources.”

“Typically people either comply or some reports tell of [them] bribing their way out,” said Mr Zwirko.

Firstly, for its proximity to Mount Paektu – considered to be a sacred mountain in North Korea and said to be the birthplace of Kim Jong-un’s father.

“It’s the town’s significance as the [reported] birthplace of Kim Jong Il that makes it the big important state construction project that it is,” said Mr Zwirko.

US promises action on any North Korea missile test