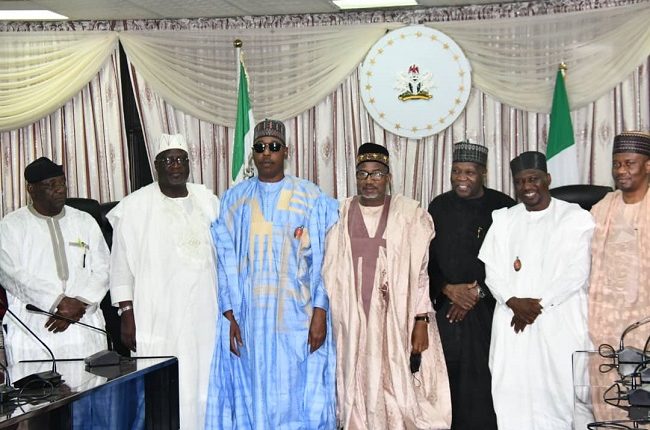 North-East Governors Forum has noted with dismay, that despite the challenges of development, especially, the infrastructural deficit in the subregion, 2021 proposed Federal Government budget makes provision for only N45.32billion for Capital projects for the entire sub-region representing a paltry 0.35 per cent of the proposed N13.02 trillion.

The displeasure was contained in a communique issued at the end of the Forum’s regular meeting held in Yola, Adamawa State on Thursday.

According to the North East Governors, the development means that the North-East is highly short-changed and demanded a review of the 2021 budget in the spirit of equity and inclusion by the National Assembly.

It also noted with dismay, the lack of budgetary provision in respect of the Mambilla Hydro Project in the 2021 budgetary proposals and called on the Federal Government to make the project a matter of serious priority, resolve all encumbrances around the project and order action on site.

The Forum equally mandated the North-East caucuses of both the Senate and House of Representatives to as a matter of necessity take immediate steps to redress the imbalance in the budgetary allocation because that is the reason of their election.

The forum further observed that the sub-region has been unfairly treated in the provision of roads infrastructure by the Federal Ministry of Works & Housing and further noted with dismay, the slow or outright non-existent progress on the pace of the roads already allocated in the sub-region and therefore called for the immediate reactivation and review of the comatose existing road contracts in the sub-region.

The forum in the communique also noted that there is a relative improvement in the security situation in the sub-region, but however, stated that the activities of Boko Haram, bandits, cattle rustlers and kidnappers are still constituting a threat to sustainable development.

While commending the efforts of the security agencies in the sub-region towards tackling criminal activities, the Forum agreed to strengthen community policing and action to complement their efforts.

In the communique, the Forum stated that it has critically examined the challenges of education in the sub-region and resolved to adopt a regional approach by being deliberate on transforming education, especially at the basic level as well as agreed to form the Northeast Council on Education.

It, however, reaffirmed the commitment of Member states within the Sub-region to enforce the Universal Basic Education Commission (UBEC) Law to protect and ensure all children have an opportunity to acquire basic education.

It, however, advised that while working on the plan, it should ensure that, projects are demand-driven to ensure impact and accountability and however, frowns passionately at a situation where projects are imposed on the states without due consultation.

The forum’s meeting further noted that Gender-based violence is still a major nuisance in the sub-region and called on all the Governors of the zone to domesticate the Violence Against Persons Prohibition (VAPP) Act 2015 and ensure the rapid dispensation of justice on gender-based violence.

It stressed the need for sub-regional integration on significantly cross-cutting issues that could mutually be beneficial to States within the region and agreed that the State Governors within the region should appoint Special Advisers on Regional Integration.

During the third meeting, the forum critically examined the status of the post- COVID-19 Economic Stimulus Package of N2.3trillion and solicited for equitable and Fair treatment especially in view of the economic and social challenges facing the sub-region.

The forum, therefore, resolved to engage Arewa Research and Development Projects (ARDP), to provide technical support in key areas of development such as Agriculture and Education and also resolved to pursue vigorously the issue of securing admission for its candidates in Nigerian tertiary institutions to fill its quota.

Bauchi State has been selected to host the fourth meeting of the North-East Governors Forum (NEGF) scheduled for 3rd and 4th March 2021.

This was contained in a communique issued at the end of the 3rd meeting of the forum held in Yola, Adamawa State hosted by Governor Ahmad Fintiri of the state.

Controversial Catholic priest and Spiritual Director of Adoration Ministry, Enugu, Nigeria, (AMEN), Rev Fr Ejike Mbaka, has taken a swipe at President Muhammadu Buhari and past leaders of the country demanding that the President should apologize to the country, especially the youth, on behalf of himself and his predecessors, for causing Nigerians so much pain…North-East Governors chide FG  North-East Governors chide FG

I accept my impeachment in good faith, it was the will of God for me, former Speaker of Gombe Assembly declares