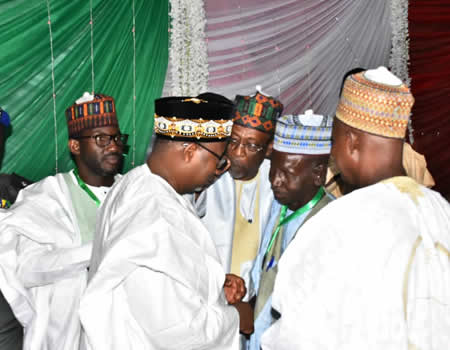 The North-East sub-region though being ravaged by insurgency particularly the Boko Haram menace has been described as the incubation centre of the Nigerian politics.

The assertion was made by the Bauchi State Governor, Sen Bala Mohammed Abdulkadir at the North East Caucus Meeting of the main opposition Peoples Democratic Party (PDP) held at the Command Guest Hotel, Bauchi on Tuesday.

Bala Mohammed who was the only Governor from the region that attended the meeting while other PDP Governors of Adamawa and Taraba states were represented by their Deputies observed that PDP in the North East has the required human capital and experienced party members who can manage any political opportunity.

He further attributed the challenges facing the progress and development of the party to the personal ambitions of some of the elite members of the party saying, ” I am delighted to be at this auspicious occasion, this type of meeting is key towards ensuring mutual understanding among the party members”.

The Bauchi State Governor added that, “I am confident that with the kind of this meeting, we will conduct our forthcoming party’s congresses without any crisis or violence.”

The Governor further appealed for equal opportunities to all the members of the party so that the challenges bedeviling the party can be addressed.

He said, ” We should give equal opportunities to all the party members to participate in any of the assignment, this is the only way we can progress. We must work together to address the challenges facing our party and the zone in particular.”

The Governors of Taraba and Adamawa States, represented by their Deputies, in their respective remarks, assured the party of their support for the peaceful conduct of the forthcoming party’s congresses.

In a remark, the PDP National Chairman North, Senator Suleiman Nazif Gamawa said that the meeting will afford them the opportunity to review their successes and performances ahead of future engagements.

Suleiman Nazif Gamawa also expressed gratitude to the Governors of the party in the North East for their support to the National Working Committee (NWC) and called for its sustenance.

Earlier in a welcome address, the PDP North-East Zonal Chairman, Barrister G.T Kataps while commending the Bauchi State Governor for supporting the conduct of the party in the state, described him as an ambassador of PDP in the zone.

He then appealed for fairness in the conduct of the congresses of the party in the Zone advising however that only credible party members should be elected in order to move the party forward in the Zone.

The Zonal Chairman then commended Bauchi and Adamawa States Governors for purchasing the nomination forms for other members of the party in states other than their own saying that such gesture will further cement the unity in the party in the zone.