North and year of anomie 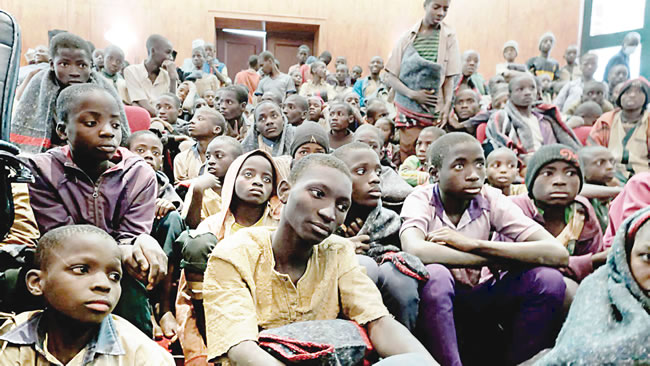 President Muhammadu Buhari rode to power on the premise that he would fix the economy and return peace and security to the country. Five years on however, Nigerians feel more unsecured than they have ever been with religious and economic terrorists occupying territories in the North East, North West and parts of North Central.

Terrorists have killed more than 30,000 people and forced over two million people from their homes, according to the United Nations, in the last 11 years. Despite efforts by Nigeria and its neighbours, the campaign of violence by Boko Haram and its splinter group, ISWAP has increased a notch since the beginning of 2020. Religious and economic terrorists served early notice of their intention to increase their activities in 2020. The splinter group of Boko Haram, ISWAP substantially closed 2019 when on Christmas Day in Michika, Adamawa State, they executed at least 11 citizens.

Chroniclers recorded at least 50 deaths by ISWAP and Boko Haram between that fateful Christmas Day and January 2020. Rev. Lawan Andimi, chairman of the Christian Association of Nigeria (CAN) in Michika was killed on January 24. Despite the ransom price offered, they slaughtered the preacher. Also, Rev. Denis Bagauri was murdered in his residence at Mayo Belwa of Adamawa on January 12 and in Chikun and Birnin Gwari of Kaduna State, 35 people were killed and 58 others abducted when bandits raided 10 communities on January 15. One of four kidnapped seminarians of the Good Shepherd Catholic Seminar in Kakau, Kaduna State, was found dead on February 2nd.

A recent wave of deadly attacks in the southern part of Nigeria’s restive Kaduna State has brought the seemingly never-ending cycle of communal violence and impunity in the state back into focus. The media reported that gunmen killed at least 43 people between July 21 to 24 and that 178 people were killed in the past seven months across southern Kaduna communities.

As at December 12, the Southern Kaduna People’s Union (SOKAPU) said in a statement that the bloodletting in southern Kaduna continued unabated in the last 48 hours with the killing and counter-killing of 16 persons. Five members of a family and two others in GonaGan village in Zangon Kataf Local Government Area (LGA) were the first to be killed with the invaders said to be Fulani herdsmen, also burning down 17 houses in the village. Commissioner of Internal Security and Home Affairs, Mr. Samuel Aruwan also disclosed that nine persons lost their lives in a reprisal attack.

In a statement, SOKAPU said the killings in GonaGan village will register as one of other attacks on the Atyap Chiefdom after a much celebrated and publicised peace accord was reached between Atyap natives and their long time settled Hausa/Fulani communities in August this year. SOKAPU’s spokesman, Luka Binniyat said in his statement that on 15th November, 2020, the District Head of Ma’Zaki, in Atyap Chiefdom, Mr Haruna Kuye, was murdered along with his 9-year-old son, Destiny Haruna, while his wife and daughter survived with severe injuries inflicted on them. On Thursday, 17th December, 2020, armed men paired on four motor bikes stormed KujeniTudu in Kajuru LGA of Kaduna State and attacked the Adara village, killing an elderly man, Bala Umaru, 75 and looted the village.

SOKAPU then urged the government to use this information for a holistic investigation on the fleeing murderers and unravel those behind them and their motives.

According to BBC’s Hausa language service, 12 Nigerian police officers were kidnapped along the Katsina-Zamfara expressway in the country’s northwest region. For About 11 years, Nigeria has battled Islamist terrorist group Boko Haram and lately, economic terrorists, more popularly called bandits in an insurgency that has cost up to 30,000 lives and displaced 2.3 million people in and around the northeast region of the country.

The group, which has carried out attacks in the country’s capital Abuja as well as in neighboring countries of Chad, Cameroon, and Niger, remains very active in the northeast even after splintering into the Islamic State West Africa Province (ISWAP) and the Jamaa’atulAhlis Sunnah (JAS), with both carrying out attacks on civilians, aid workers, and the military.

Banditry as used in the North West describes numerous groups that have viciously attacked local communities, killing scores of people, and have also been kidnapping as many as they can for ransom. Zamfara, Katsina, and Kaduna states are the epicenters of the growing crisis.

The current orgy of violence in the North West commenced after vigilance groups formed from the Hausa communities for security purposes carried out extrajudicial action against Fulani pastoralists as tension mounted from increasing competition for land and water resources between the pastoralists and the farmers as the effects of climate change exacerbate. Incidentally, this period coincided with an upscale in cattle rustling by armed gangs. The seven states in the North West accounting for about 25 per cent of the country’s land mass. Given there is very little or even no state presence in most parts of the northwest region beyond its state capitals and major towns, gang leaders have carved up areas of the rural zones. It is easy for non-state actors to run rampant in the deep rural areas.

Head of research at SBM Intelligence, a geopolitical consultancy based in Lagos, IkemesitEffiong says “insecurity in the northwest is causing significant problems for farmers. In many areas, they now pay bandits to have access to their farms in order to harvest—with fees often ranging in the hundreds of thousands of naira,” says, the. “Even with this quasi-taxation, security is not always guaranteed. Food insecurity is now a national emergency and the federal and state governments in the northwest need to urgently and closely cooperate to re-establish an adequate security presence in farming areas, so normal activities can resume.”

On December 9, the Emir of Kaura Namoda narrowly escaped death after his convoy was attacked by bandits while returning from Abuja. Eight members of his entourage including chiefs, bodyguards and policemen were killed.

Since the military approach has not been effective in curbing terrorism, state governors have been brokering peace deal with the bandits in the region but these held for only a few months before they collapsed.

3 January –50 people killed in an attack by Boko Haram on an island in Lake Chad in late December.

6 January – At least 32 people were killed and over 35 injured when an IED explode on a crowded bridge in Gamboru, Borno State.

7 January – Twenty soldiers killed and more than 1,000 people displaced after an attack by ISWAP in Borno State.

9 February – Auno attack – At least 30 civilians were killed and many more abducted by militants in Auno, Borno State, Nigeria. Four soldiers were killed and seven more wounded in an attack on the same village last month.

23 March – At least 50 Nigerian soldiers killed by Boko Haram militants in an ambush near a village in Yobe State.

5 May – Soldiers killed 134 militants in northeast Nigeria since it began on May 1.

13 June –ISWAP conducted two attacks in the Monguno and Nganzai areas killing at least 20 soldiers in the first location and at least 40 civilians in the second location. Hundreds of civilians were wounded and many buildings were torched in the violence, according to local sources.

28 June – Six soldiers killed in an attack by Boko Haram, who stole weapons during the attack.

10 July – Boko Haram assaulted Baga and killed about 20 soldiers stationed there, and then opened fire on a military convoy near GadaBlu, killing 15 soldiers.

13 July – Militants killed eight soldiers while attacking a military convoy near Kumulla, Borno State, Nigeria, and then killed another two soldiers during a firefight near Kolore village.

22 July – Five aid workers were executed by armed men who had kidnapped them last month in Borno State, Nigeria.

25 September – At least 30 people, including civilians and security personnel, were killed when militants attacked the convoy of a region governor near Baga, Borno State.

28 November –About 110 farmers massacred by Boko Haram in Koshebe, Borno.

December 8: Bandits killed sixteen in Dambatta, Kano; police officers claim the deaths were due to a road accident.

December 11: Bandits may have killed three people and kidnapped up to six hundred students at a school in Kankara, Katsina.

Calls for removal of Service Chiefs

A day after over 300 pupils of Government Science Secondary School, Kankara, Katsina State were abducted, a photograph appeared online of Chief of Army Staff, TukurBuratai visiting his snake farm in Nassarawa State.

Since the beginning of 2020, there have been repeated calls for President Buhari to replace his service chiefs. Every notable segment of the population like the National Assembly, Governors, socio-cultural and ethnic associations, labour unions and civil society organisations have all asked the President to reshuffle his senior military personnel. Buhari has however, refused to heed the calls with his spokesmen insisting that Buhari would not succumb to blackmail.