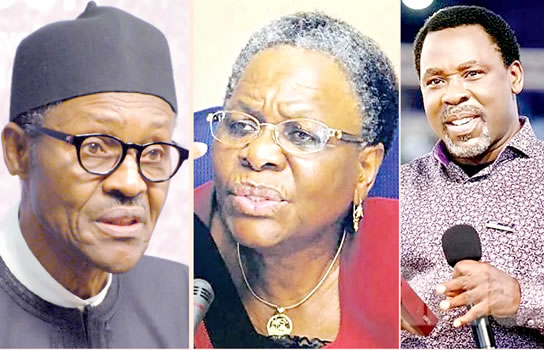 THE Deputy Prime Minister and Minister of International Relations of Cooperation of Namibia, Netumbo Nandi-Ndaitwah, has identified non-issuance of visas to religious pilgrims coming to Nigeria as the major reason Air Namibia stopped scheduled flights to Nigeria.

She said the 2019 disagreement between Namibia and Nigeria led to the refusal of the Nigerian embassy in Namibia to issue visa to Namibian religious tourists on pilgrimage to Prophet T. B. Joshua’s Synagogue Church of All Nations (SCOAN), adding that Air Namibia had in May 24, 2019 suspended flight on Windhoek – Lagos – Accra routes.

The Namibian Deputy Prime Minister said this when she hosted a group of Nigerian tour operators and journalists in her office in Windhoek, the Namibian capital.

Answering questions on the current suspension of Air Namibia scheduled flights to Lagos- Accra, Nandi-Ndaitwah said “You know this is the second time it is closing. The problem is economic. The airline industry is not really doing well. We had the unfortunate situation last year.

“When the Namibians could not get visas to Nigeria, especially most of the people who used to go in groups to T.B.Joshua’s church we have to flight to the route. The Namibian tourists used to go in groups and it was helpful to Air Namibia, but when the issuing of visas stopped and they could not go, the load for Air Namibia became so low, coupled with economic recession and difficulties in the airline business, they had to stop flying.

Also, you know the route connectivity was linked with Ghana, but the big load was not to Ghana, it was Nigeria. Notwithstanding, the air service agreement is still there.”

She, however reiterated the desire of her country to welcome Nigerian tourists and to continue to have closer relationship with Nigeria. “We have a very long history of relationship between Namibia and Nigeria. During our struggle, many young Namibians studied in Nigeria.

The Nigerian government was among the governments that accepted SWAPO and gave us all round support. In fact, there was a budget for SWAPO.  As you know in the Namibian struggle, at one time, we had frontline states that were very active. These were the countries in southern Africa.

They were called frontline because they were closer to Namibia. But Nigeria which is far became part of the struggle. So, when you go to records, you hear us talking about the frontline states and Nigeria.

This was because wherever the frontline states met to discuss the issue of Namibia, Nigeria was always there. It explained why, after independence, Nigeria was among the first country to establish diplomatic relations with Namibia and even opened an embassy in our country.

“I know what tourism can bring to a country. We have decided to promote tourism and specifically, we are looking at Africa. Unfortunately, for too long, as Africans, we never see ourselves as tourists. That means we never linked to one another. That is working against us.

“It is so gratifying that now we’ve realised that we must do something very seriously. We have seen that once there is an issue in Europe, our tourism suffers as an African country because we do not travel among ourselves.

“Of course of late we have noticed that there has been an increase of tourists coming from neighbouring countries: Angola, Botswana, South Africa, there has been that traffic.  We are now on our way to open up new doors.

“For Nigeria, which is a big economy, a big population, we really feel that together, we will be able to achieve our objectives.

“I am informed that in 2019, we had 744 Nigerian tourists. But that is a drop because the record of 2018 is 1500. We want these numbers to increase. Also, Namibians should be able to travel to Nigeria.  We feel that such a link will not only end up in tourism, it could also involve other economic activities talking about trade and investment between our two countries.

“Our heads of states have just adopted last year Africa Continental Free Trade Area. That is meant for African citizens to make use of. It is only when we do that we can realise Agenda 2063, which is Africa will become an industrialised continent.

“We are looking at Africans to build the continent and it is African citizens that are going to do that. Let us visit one another, let us know each other. That will help us. Namibian market has been a European market. Now we want to make it an African market.”

7th AMVCA: Bimbo Ademoye, Daniel Etim Effiong, Reminisce and other promising stars to watch out for