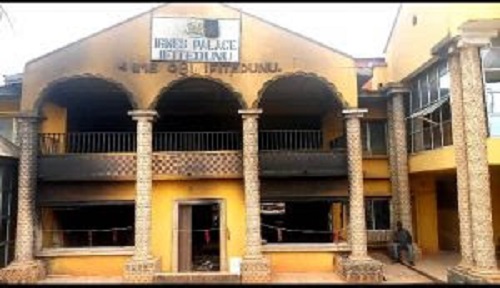 Confirming the incident to newsmen, Igwe Iluno said though no persons are being suspected, the attack was an abomination, an attack on the Ifitedunu community, as several artefacts and historical documents of the community were burnt to ashes.

He added that personal properties running into millions of naira were affected, even as he confirmed the existence of a leadership crisis that has lasted in the community for some years now.

The President-General of the community, Mr Uchenna Nwoye, among other persons who were in the palace to sympathize with the Traditional ruler, called for an immediate investigation into the incident, with a view to bringing perpetrators to book.

The injured were receiving treatment at a hospital in the community.

Meanwhile, the Commissioner of Police of Anambra State Police Command, CP Monday Bala Kuryas, has ordered investigations into the unfortunate attack of the Palace of Igwe Ifitedunu HRH Dr Emeka Ilounor and the resultant fire outbreak and damage to property- including the Igwe’s official vehicle.

The CP, in a statement made available to Journalists in Awka, by the State spokesperson, DSP Ikenganya Tochukwu, said information so far available to the police reveals that two persons sustained fire-burn injuries and are currently receiving treatment in a hospital.

He said the fire was put off by the combined efforts of good-spirited individuals around the area. The Police Operatives have also cordoned off the area in other to prevent looting by other hoodlums.

The CP while sympathising with the Igwe, reiterates that the command is not deterred by the incident and will surely deliver on its mandate on the protection of lives and property in the state.

In spite of the huge investment in the water sector by the government and international organisations, water scarcity has grown to become a perennial nightmare for residents of Abeokuta, the Ogun State capital. This report x-rays the lives and experiences of residents in getting clean, potable and affordable water amidst the surge of COVID-19 cases in the state… Nonagenarian, two others escape death, as hoodlums attack palace of Anambra Monarch

The Lagos-Ibadan railway was inaugurated recently for a full paid operation by the Nigerian Railway Corporation after about a year of free test-run. Our reporter joined the train to and fro Lagos from Ibadan and tells his experience in this report… Nonagenarian, two others escape death, as hoodlums attack palace of Anambra Monarch